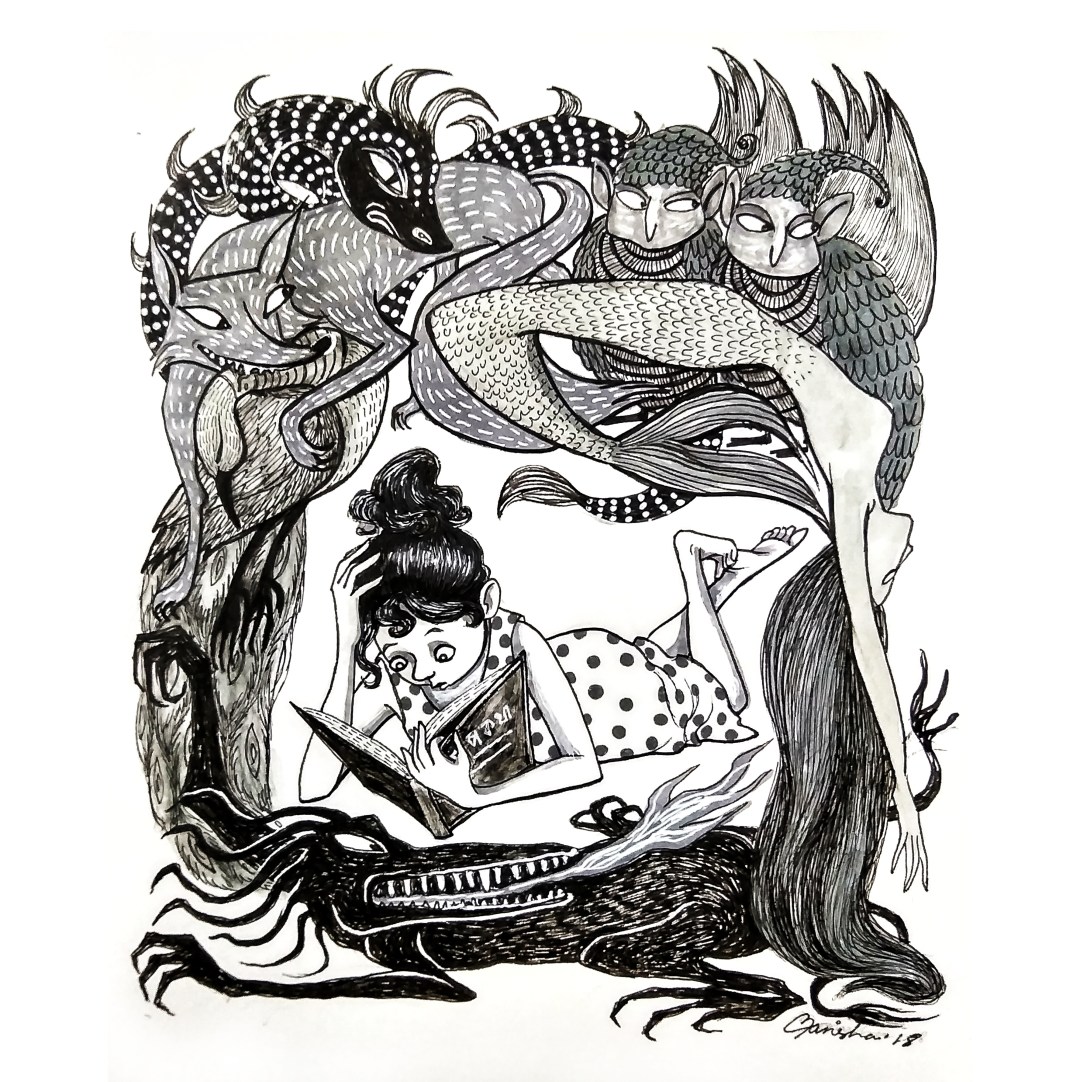 B for ‘Bhoot’: In Conversation with Manisha Naskar

Manisha Naskar is a well-known freelance animator and illustrator from Bengal. Her work includes illustrations for famous Bengali children’s stories like Satyajit Ray’s Pagla Dashu for Pratham Book’s Storyweaver and an animated adaptation of “Mr Shashmoler Sheshratri” (A Strange Night for Mr. Sashmal) as part of her diploma project . In this interview, Manisha opens up about her experience of illustrating the ghosts that are a part of Bengali folklore, culture and childhoods.

What is the backstory to your Bengali ghost illustration series? What prompted you to draw this array of supernatural creatures?

I remember my very first ghost illustration, which I did around the time of Halloween and posted on Instagram. As per the Bengali calendar, we have a similar ritual called Bhoot Chaturdashi. I had made the illustration for that. A Petni is seen grabbing fish with her extended hand. Those things fascinate me as a visual designer that ghosts, particularly in Bengal, have stretchable legs and arms.

What inspires your art? Are you influenced by particular stories or texts from your childhood? Or do you have memories of seeing ghost portraits in books as a child?

I used to be fond of Bengali ghost stories where the ghosts were not so scary, demonic like how western ghost stories usually portray. My favourite ghost story was Bhushandir Mathey by Rajshekhar Basu. At one point of time I wanted to make an animation film on that as well. I loved the illustrations by the author too, printed in that book. I was quite inspired by the simplistic pen or ink drawings and the regionality of them. I wanted to revisit that nostalgia through my illustrations.

What do you make of this art and cultural tradition of Bengali bhoots? Why do you think this typology of ghosts exists in Bengali literature and culture?
I think the portrayal of ghosts in Bengali literature used to be quite similar to the oral stories of Bengal. I think most of us heard ghost stories from our grandparents or elders. In those stories ghosts coexisted with humans. They were scary but mostly harmless. They had their own problems, loves, gains, pains in life (or death). What I want to say is that ghosts are also a reflection of Bengali culture and society. Ghost stories have been a part of our literature and culture for decades. The different types of Bengali ghosts like Shankhchunni, Petni, Brahmadatti, and Mamdo are various ghostly representatives of our society. We Bengalis are laid back, chatty, and kind of romantic, so our ghosts are also friendly, not so scary. 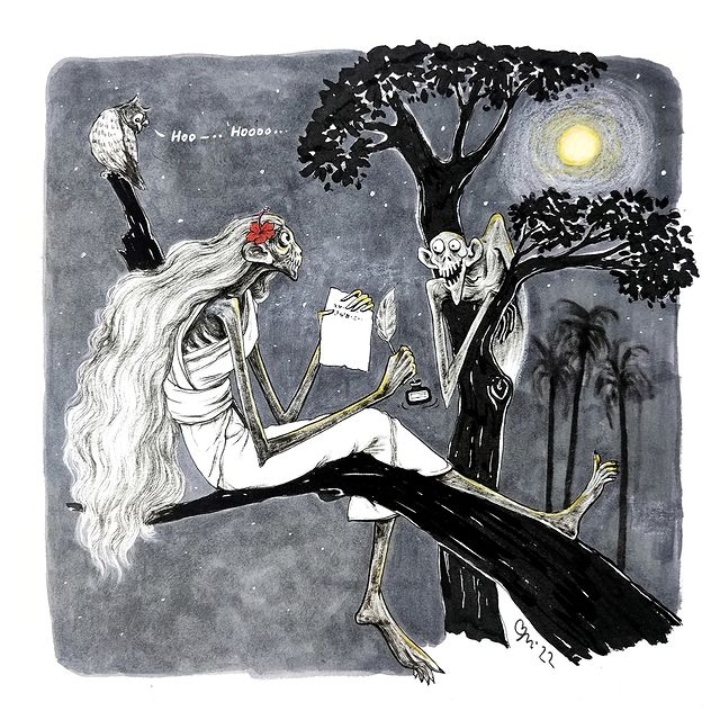 How do you think they are comparable to ghosts from the rest of the subcontinent or to their Western counterparts?

As I mentioned earlier, Western ghosts are scary, angry and vengeful, unlike Bengali ghosts. Our ghosts fall in love, chat, and enjoy their ghostly features and perks. For example, they can just bring anything from anywhere, and they don’t need to go physically – the advantage of being a ghost. They don’t hate humans. Instead they give boons if they are happy, for example, the Bhooter Raja (King of Ghosts) in Gupi Gayen Bagha Bayen.

Looking at your pictures, the first impression for me is that they are funny. Do you think horror comedy is a thing in Bengali literature and culture; if so, why?

Yes, I think so. As I said before, most Bengalis have a sense of humour and a love for comedy. Deep down, perhaps we all want to be happy and not scared the hell out of (at least I do so!) which also reflects in our art and literature, especially horror.

Do you think this humorous portrayal has anything to do with their personalities as benevolent, mischief-makers or pure evil spirits?

I create a backstory for the ghosts I draw. I try to illustrate the story through my artwork. Like humans, I feel ghosts also have different personalities. I try to portray that: for instance by making one ghost look like a naughty kid, another a bodybuilder, or a foodie and so on. Sometimes I create an imaginary situation and then make the composition. I like it to be comical, I think that is my personal choice and culturally motivated as well. I think I have a certain sense of humour which I like to portray through my drawings, because as a reader I always liked horror-comedy stories. I am an animator as well so, I have an attraction towards exaggeration, expressions, storytelling through drawings etc. I try to make my ghosts expressive, so that I can convey some emotion through their expression. I believe you can tell many things with expression without using any text.

There’s a tradition of showing ghosts as emaciated beings with elongated limbs. Why do you think they have this malnourished look, despite being mirror images of people with diverse caste and gender identities?

I think it has a relation to how after death everyone is assumed to end up the same, and the social differences get blurred. However, Satyajit Ray’s portrayal of healthy ghosts was delightful. My ghosts portrayals are how you described. In my imagination, they resemble skeletons and mummies. Their features are scary, but they are not.

The ghosts in most of our folktales and literature, as well as in your illustrations, are often seen inhabiting trees, broken buildings, marshes. What do their controversial living choices (as opposed to the haunted mansions or castles of gothic literature) signify about their status in the spirit world or hierarchies within it? What role does caste/class/gender play in this?

I can’t make any general statements but I like to believe that ghosts choose places to stay according to their needs. Like the Mechopetni (‘mecho’ meaning fish), known for their love of fish, will for that obvious reason, stay near a pond on some tree or somewhere. My ghosts generally live in trees because I have that nostalgia of reading and listening to stories about ghosts staying in different trees, so I relate more to that. Yes, like our human society, ghosts also have caste, religion, gender. Like, Bramhodotti is a Brahmin ghost and Mamdo stands for Muslim ghosts. Shankhchunnis are the ghosts of married women. I can’t comment on discrimination, I am not that well informed in this area. But I can say I observed a hierarchy in their position in their society. Bramhodotti is a more respected figure in their society than others. I think it reflects on our society’s beliefs. But beyond the differences they all live together with harmony. Although I don’t like to carry forward these classifications, these are some of my observations from the readings.

Your sketches are reminiscent of a generation of ghosts in Bengali folklore and children’s literature with “ears like kulo, teeth like radishes, eyes like brick-kiln” (“mulor moto daant”, “kulor moto kaan”, “bhatar moto chokh”) long, shrivelled hands and feet. How do you translate these elements visually through your drawings?

Not that every time I draw, I keep those lines in mind; they must have an impact consciously or unconsciously. The drawings also have developed and changed with time, but more or less, I try to stick to my original idea and visualisation. The long arms and legs fascinate me, and I like to explore with them. Exaggerating their poses, making them super flexible, I like to play with them.

Are your stylistic methods/techniques different for drawing supernatural characters as opposed to their human counterparts? How?

Yes, definitely, I play with the ghost’s proportions mostly. Ghosts are much exaggerated whereas my human illustrations are more realistic. Technique is more or less the same, but I use them differently for both. I try to keep ghost illustrations more unfinished and rough than humans. I mostly work with brush pens, micron, alcohol markers, dry brushes and of course white gel to hide my mistakes.

How did you carve out/distinguish your own sense of style in this niche of typically Bengali ghost illustrations?

It’s difficult to answer this question because I really don’t know. It has happened by doing. I realised this when people started giving me compliments on social media. I realise it might communicate to some extent. I had started making them for my pleasure. The niche I don’t know, but I am flattered if you think so. Being typically bengali, these are my roots and that’s all I know and grew up with.

Some of the women spirits in your illustrations are seen dabbling in domestic chores typically associated with women, such as brooming, cooking fish or inking their soles with aalta. What does this insinuate about our women ghosts?/ Why are they still engaged in these mundane pursuits?

They are not doing their domestic chores only because of their being women ghosts. They represent different characters also like, cleanliness freak, foodie, etc. In them, many women I have seen or interacted with on local trains, among my relatives, find themselves represented; I take influence from them. Also yes, our society is still like this; women sacrifice their part to serve others. But in my stories, I wanted to portray that they are independent and in charge of their own lives. They hunt, cook or clean for themselves. I draw more female ghosts than male because they are kind of my reflection too.

Do they revert/subvert these gender boundaries in their afterlife avatars?

Yes, they do, and they are in charge of their lives. That’s why I mostly draw women ghosts alone enjoying their daily life.

With the advent of modernism and technology, do you think our age-old ghosts are under the threat of extinction?

Yes, I think so, that’s why I try to recall them through my drawings. I am not a writer; I can only draw my stories. I try to do that. Anyway, I have a love for old times, nostalgia and that reflects in my art.

How do you keep them relatable and contemporary while still drawing from their folklorish origins?

The most important thing is that drawing doesn’t have a language, so anyone can enjoy it whether they know  the origin or not. I don’t want to make any revolution here; I started making them for myself. I am happy enough that people like them and relate to them. If it has potential it will live long.

Hello, my name is Manisha Naskar. I was born and brought up in Baruipur, which is a suburb near Kolkata. Two things that are very clear in my memory from my childhood are my love for drawing and story books. As a child I used to cry more for books than candies, although the smartphone has now ruined my bedtime reading habit.

I went to Rashmoni Balika Vidyalaya in Baruipur. I thereby graduated in Graphic Design from the Govt. College of Art and Craft, Calcutta, and did my post-graduation in Animation Film Design from NID Ahmedabad. Currently, I am pursuing my PhD from IIT Bombay. I am a freelancer. You can find my artworks on my social media accounts (Instagram, Facebook) and on Behance. I also work as a visiting faculty in École Intuit Lab Kolkata, NID Ap, etc.

I like to travel, mostly to the mountains. I love plants; Our house is full of plants. Making illustrations for myself is like a refreshment to me. I mostly make them in the traditional method, by pen and paper. This is the most comfortable medium for me. I am a shy person so I think I have said quite enough.