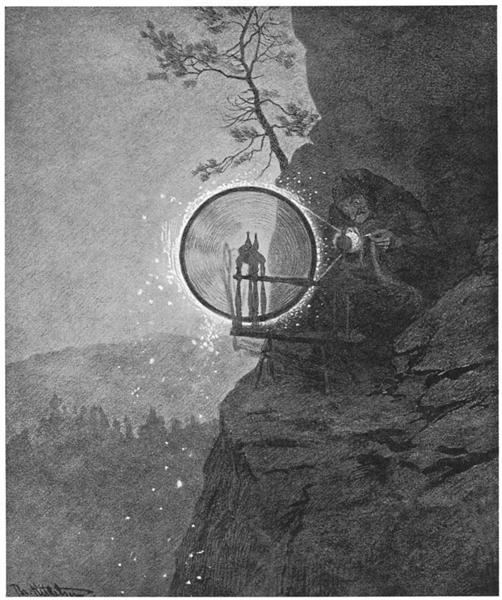 The Cult of the Great Tree-Witch

“Paya I ate ….now play round and round.” My 3-year old niece Myra came running with my phone in her hands. YouTube can make her do anything; she can eat while listening to CoComelon, she learns rhymes and alphabets from Shafa/ Vlad and Nikki , she dances to the tunes of Chak dhoom dhoom. YouTube for her is like the “burra baba”(the bogeyman) that my aunt would conjure up to get us cousins to listen to her. Eight of us would sit in a circle around her, and then she would slowly let down her long black hair, cover her face and say, “Eat quickly or I will summon the burra baba.” We would shudder and giggle at once, and finish our food. I am always nostalgic for those days and whenever I see Myra leaning over her ma’s phone, I would think how different our childhood days were. But are they?

Few days back I took her to a park near our place. She loves the park, she loves people, and she loves stories–better still, she loves conjuring tales in her beautiful mind.

‘You know the other day we saw the tree ghost”

“Achha-”, I said, looking forward to the surprising yarn that she was about to weave.

“You see that tree”, she said pointing at a huge tree in the centre of the park.

“It has ghosts in it. They come out to catch children. They suck blood out of children who are bad”

“You mean the ghosts are vampires”, I protruded my upper jaw, revealing the canines, letting out a little grrr sound imitating a vampire.

She gave me a look of disapproval and said,” You know nothing Paya. Vampires do not live in India.”

“You know nothing.The big tree has ghosts… not vampires. They grow big by drinking blood…   like I grow big when I drink milk. Yes. There is blood all over that tree.”

“I can see no blood though’, I replied moving closer to the tree.

“Stop! Don’t go there”, she said tugging at my hand and trying to pull me back.

It was a banyan tree, covered in vermillion that people might have worshipped, or as my niece and her friends would say it was smeared with blood sucked mercilessly by the tree ghost!

Not much has changed after all!

We (I mean, few of my classmates when we were in the third grade) found one of our stories in a tree too, but that was a rubber tree. The resin from the tree had dried and it gave the bark a mahogany-red hue. For us, it became the altar of the Great Tree-Witch, where sacrifices were made by her followers. Someone started the story, and later people kept adding names to the list of her followers. Anyone could be a follower, but the quiet ones, the seemingly mean ones, or those who stood out were more desirable candidates. A senior who was perhaps a recluse and was mostly seen alone was a follower, the girl who asked too many questions in the class was also a follower, but the new girl who had greyish-green eyes was definitely the leader of them all.

Thankfully, I was not in the group of the ‘popular kids’. I say thankfully, because I could avoid their daily rituals and offering to placate the Great Witch. They would keep morsels from their lunch near the tree, believing the blood-thirsty Witch would be satiated with a morsel of the aalo-bhindi that they themselves detest. Then they would pray to the witch for clemency. Years after this I will be reminded of this prayer of theirs while watching the movie Stree , and a smile would escape my lips on listening to, ”Oo Stree kal aana.” Their supplications were also to ward off the Tree Witch. They once did 100 circumambulations of the tree!

Even though, these stories did fall into my ears and I was a tiny bit afraid, still I found their acts of appeasement hilarious. But then my teacher thought of turning my life into a horror story. Usually, the ‘popular kids’ would jump at the sight of new admission and take them under their wings. This time it was different. No one wanted to sit beside the new girl with greyish-green eyes because as we all knew by now, she was the chief of the cult of the Tree Witch. My teacher, who thought I was the quiet, empathetic child who would appreciate the opportunity to introduce Moomal (that was her name) to the school, made her my bench-partner. I was sweating and shuddering with fear. This is not even an exaggeration! I tried to keep my interactions with her minimal.

“Are the teachers strict?”

“Do you like reading novels? My father got me these books”

“Sorry, I don’t have time for novels.”

“Do you have a red-pencil? I did not know you need to draw margins with them.”

I did not even take back my pencil when she returned it. She was the Chief after all.

This continued for the next three days.

Then she said, “I know the rumour about me. I am not a ghost”

“Yes, you are the chief-“ I had half-uttered the sentence when I noticed her teary-eyes.

“Please do not cry. I do not think you are a ghost. Please don’t…. Rita miss would think I am a bad child who made you cry”

She then told me that she felt lonely and has no friends in the town. She was from Rajasthan and her father got transferred to Ranchi. They were here for four years and she pined for friends to play with.

“Will you be my friend?” I asked ashamed of my behaviour in the past few days

We shook hands and that was the beginning of our friendship. Later that day during the lunch hour I told her the story of the Tree Witch and her followers, she laughed and shared the story about the ghost of a woman in the Jambul tree in her village.

A child can find stories either in an old closet, or in a vermillion-stained tree. They see the world with the wonder of a philosopher and turn stars to diamonds like magicians, and trees and strangers into ghosts like a storyteller. But, they embrace the world with open arms, with excitement, charm and a wisdom that is esoteric to them. Children and stories (even the frightening ones) stop the world from becoming secluded catacombs of curiosity.

Payal is from Ranchi, Jharkhand. She has completed her graduation and post-graduation in English Literature from St. Xavier, Ranchi. Currently, she is a research scholar at the Centre of English Studies at J.N.U.She is trained in Fine Arts and has been a part of several street plays and skits.