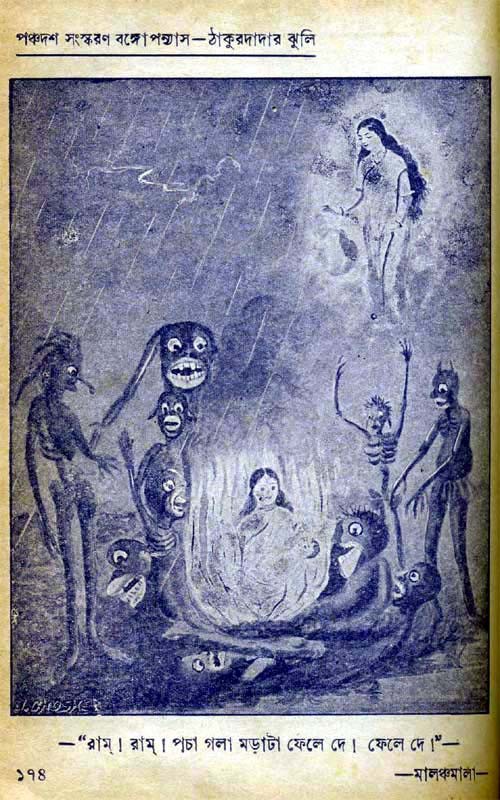 To Believe or Not to Believe: Bengali Childhoods and Indigenous Horror Fiction

Born in a quintessentially Bengali household, I grew up listening to a fascinating plethora of bhooter galpa that catered to my ever-increasing appetite for the same. In fact, having doting grandmothers and other female kin within the household meant endless evenings and nights of storytelling that sent shivers down our spine. Power-cuts after dusk were a particularly favourite time because we would then be allowed to keep aside our lessons and gather around the lantern to listen to ghost stories narrated by the elders. I distinctly remember staying wide awake at night even after others dozed off, replaying certain situations from these tales inside my head and cowering under the sheets.

From fairy tales and folklores featuring various kinds of rakkhosh and khokkhosh to original stories of bhoot, petni, bhramadatyi, etc. I was familiar with all of these characters that simultaneously intrigued and terrified me. Being a 90s kid also meant devouring several spooky series by R.L. Stine such as the much-loved Goosebumps and Fear Street books at the school library. Birthdays meant receiving wonderful gifts in the form of classic hardcover books on horror by Bengali authors, which were inseparable companions at the table during lunch and dinner, even on sultry summer afternoons when I chose to read instead of indulging in the usual brief, post-lunch siesta.

The cheaper, thinner, unpretentious volumes of pulp horror fiction that came with colourful, graphic covers and catchy titles that were variations of Dakshinaranjan Mitra Majumdar’s Thakurmar Jhuli and Thakurdadar Jhuli were not less loved.

For the Bengali child, the differences between horror and fantasy often get diffused, which has an interesting function. Not only does this leave a lasting impression on young minds who are mesmerized by the delightful patterns of storytelling, but it also highlights the essential ambivalence that marks the genre of horror fiction for children within the Bengali context. The crossroads of realism, fantasy and the supernatural meet within the space of Bengali children’s literature to simultaneously enthrall the readers or listeners and familiarize them with the nuances of their culture. These indigenous ghost stories, which form an indelible part of their formative years, encourage them to indulge in the enticing prospects that fantasy has to offer, traverse alternative realms of experience (often really dark versions of reality) and satiate their precocity beyond the burden of rigid lessons. This is precisely why the idea of the home as well as imaginative sojourns get conflated together, drawing children naturally to these stories that spook them while also making them realize that they are in fact situated within the safe haven of their homes.

One peculiar feature that makes Bengali ghosts and spirits stand out is their undying love for fish, a trait that I found recurrently appearing in several oral lores about mechho-bhoots or petnis my mother narrated to me during my childhood. These stories were usually woven around a formulaic framework‒ remote, rural settings; staying outdoors at late or odd hours; travelling for long distances on either foot or on bullock-carts; encounters with malicious spirits while crossing jungles or burning ghats; and finally, being rescued through the aid of good, ancestral spirits or holy men and their “good” magic.

There was a particular tale I remember about a nasal-voiced petni getting her hands scalded by a human whom she decides to persistently entreat for giving her hilsa fish to eat, which was quite humorous instead of being actually scary. In fact, Bengali horror fiction for children consists of several such funny or even friendly ghosts who fail to live up to their notorious reputation of being deliberately malicious. They turn out to be laughingstocks within the ghost-community as well and the readers or listeners often tend to sympathize with their plight rather than trembling at their sight.

Ghost stories featuring dauntless, skeptical characters who are ultimately led to believe in the existence of spirits were the ones that I found the most fascinating. It is perhaps owing to our own befuddled notions of death and the afterlife that a steady belief in the paranormal and the supernatural is always marred by ounces of doubt. One such story, titled Penetite, written by Leela Mazumdar particularly intrigued me. Narrated by the child-protagonist Gupe, it revolves around his encounters with three strange boatmen, Shibu, Shiji and Guji who initially befriend him and aid him to confront his bullies at school, but finally turn out to be spirits. The ending is absolutely incredible where these three men vanish into thin air leaving the child speechless and puzzled about his own beliefs and perceptions of reality. Fictions like these are examples of enabling literature which act like windows to help young readers perceive alternate versions of reality or even question the idea of a static, absolute reality altogether. The suggestive, open endings perk up the child’s curiosity to willingly suspend disbelief and ponder further about what would have happened next. Galper Sheshe by Premendra Mitra, Akritagya by Achintyakumar Sengupta, Dine Dupure by Buddhadev Basu, Nishir Daak by Swapan Buro, Agantuk by Harinarayan Chattopadhyay, Babla Dangar Kawtha by Manoranjan Purkait, Ilish Bhoot by Dibyagopal Ghatak, Shedin Gansha Eshechhilow by Jagannath Pramanick, etc. are some other memorable works in Bengali that have sustained my appetite for horror.

Rather than explicitly attesting to the presence of spirits beyond the mortal realm, the authors cleverly leave various hints and speculations all throughout the narratives, leaving it to the readers to decipher the mysterious, incongruous turn of events in the lives of the characters. The simple, conversational flow of the language and the element of suspense interwoven into the style of narration add to the literary merit of these short stories. It is a pity that a visible gap now exists in quality horror literature for Bengali children, as Shirshendu Mukhopadhyay himself stated in an interview to IANS 2010: “…children’s literature is going through a period of lull. It is a cycle. After every productive period comes a non-productive period…A good ghost story finds takers but the stories have to be well-told. It all depends on how you write. Contemporary writers are not writing good stories” (n.p.). Markets have been flooded with bad copies of classic horror fiction or pirated ones with botched-up storylines or bad prints with low-quality illustrations and paper. The upsurge of standard translations from regional languages to English have abated the crisis to a certain extent, but it is perhaps not an overstatement to say that we still need original indigenous ghost stories to enrich the existing corpus of Bengali children’s literature.

(Note: All images have been taken from the author’s personal childhood collection of Bengali horror fiction and are copyright-free.)

Dr. Stella Chitralekha Biswas completed her PhD in April, 2022 from the Centre for Comparative Literature and Translation Studies, Central University of Gujarat, Gandhinagar, India. Her research interests include juvenile literature, pedagogy, speculative fiction, postcolonial studies, sexuality and gender studies, etc. She has published papers in peer-reviewed journals such as Bookbird, Indialogs, postScriptum, Middle Flight, Lapis Lazuli and has also contributed chapters to a number of edited volumes by national and international publishers of repute. She has a few forthcoming publications by the Edinburgh University Press, Bloomsbury Press, Routledge and the Nordic Journal of Childlit Aesthetics.