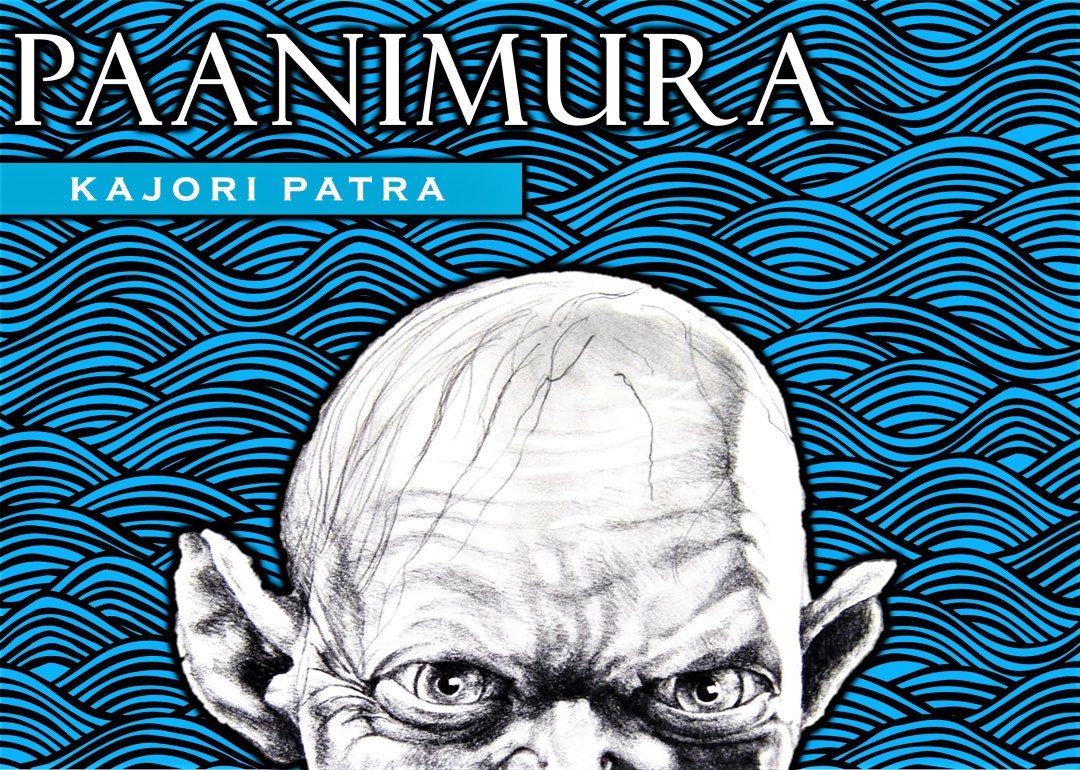 This must be the first time I am documenting this, and honestly, I have no explanations. When it happened, I was too young to understand or remember much and when I could finally perhaps look more into it, I had forgotten most of the details and nobody really knew the whole story. So, I will narrate it in the order that I know, and I guess the readers can stitch it up for themselves.

I was six years old when my mother, a doctor, was posted at Tamluk Sub-divisional Hospital. For those who are unfamiliar with Tamluk, it’s a tiny old town, once a vibrant sea-port, now abandoned, dingy and always filtered to a shade of sepia. Back in the year 2005, when we had relocated there, our town was thickly crowded with tiny brick houses. A huge playground lay at the center of it and towards the end of the town were the ruins of the terracotta palace of the Tamluk kings, right around the rented apartment where I lived with my mother, my toddler sister and our caretaker. We used to have a German Spitz dog back then, an extremely timid and harmless floof who was almost as big as I was.

My mother had admitted me to the only English-medium school in the town, it was a convent school and being a child who came from a Bengali-medium public school, it was a little hard for me to make friends. So, I would spend my after-school evenings alone, with the sun spilling the last sip of light over the entire town, making the already dusty, bronze shade of the terracotta palace darker, trying to look for secret treasures in the abandoned palace. It was a gigantic brick structure, most of the terracotta tiles and Italian floor marbles were stolen and plundered; there wasn’t anything left that was worth a penny and yet I spent countless childhood days climbing up and down the trembling stairs and walking along the long verandas that ended in abrupt breaks. Vicky, our dog, on the other hand, hated the palace. No amount of prospective lizard hunts and mice nests could lure him in. He would, unperturbed by my coaxing and cajoling, stand at the gate and bark at top pitch until I would come back and take him home.

It wasn’t right to say that I had no friends, I had one friend and she was a local. Madhumita was almost as old as I was, and she and I would talk for hours, while we played pretend-queens in the palace building. She was the prettiest girl I had ever met, flushed skin, thin aquiline nose and a tiny mark of mole on her lips; to this day, I remember her vividly. I don’t think I knew where she lived, or what her parents did, or whether she went to a school at all. But I remember that I never went near the palace lake, for, she was the one who told me the story of paanimura, the water-head.

The palace had two sections: one was the ruinous building that also accommodated a beautiful marble temple, and the other extension across the courtyard,  breaking with time and turning to  soil, ended at the vast rajbarir dighi or the palace lake. Our apartment was situated somewhat in the middle of the lake and the palace, forming a triangular periphery. During the monsoon, to my utter dread, water monitors would swim about in the shallow water near the steps, and shards of rain drops would pierce the rough, grey skin of the lake, making an incessant musical sound like the shattering of liquid glass. Madhumita, when she learnt that I would often go to sit on the steps of the lake in the afternoons of the weekend, forbade me from going there, especially during the afternoon.

“What’s wrong with afternoons beside the lake?”, I wondered.

Tamluk was a lazy crumbling town. The afternoons were heavy with sun-scorched drowsiness and just like at nights, the streets emptied quickly.

“There’s the paanimura,” she held my hand and the sincerity in her voice terrified me, “The old wrinkled body drowned many years ago.”

“Her head is bald, her skin is mouldy grey from all the time she sleeps beneath the water, but right in the afternoon, when everything is quite and the sun is so glazy that you’d mistake her head for a floating coconut, she plops out, just till her eyes, for she looks for people who she can drag down with her below.”

“She had been drowned, you see, by people who hated her. And therefore, she forever searches to drown people down with her.”

I was (am) not one to experiment and check the veracity of local myths. I would rather be safe than sorry. So, I avoided the lake at all costs after that, afternoon or not.

Tamluk would be, retrospectively, a place that would change the course of my life for, perhaps, worse, but that is a story for another time. We left Tamluk in 2006, when we shifted back to Kolkata.

A couple of years ago, probably in 2015, I was cleaning my old room back at my grandparents’ house when I found my secret box. It was an ordinary box, of course, but inside it, I had stored treasures throughout my childhood years. It was a black box with velvet covers inside, housing shiny beads, glass-cut faux stones, tiny beautiful pebbles and other glittery stuff which I used to think were worth thousands. Opening it was a little disappointing, so to say, it was as if demystifying the most romantic, incredible possession I had in my childhood. Inside it were miniature portraits, pen-sketches. I remembered that I would often sketch Madhumita and fashion her into a princess, and every time I had sketched her, I was convinced that that sketch was indeed a masterpiece of the most beautiful girl in the world. I was amused now, at my very wobbly masterpieces, where Madhumita looked like a Pinocchio with an oblique nose and her mouth was possibly pasted lopsided. Smiling, I took it to my mother.

She laughed, “Oh yes, what an artistic phase you had! You would fill pages making her side-faced portraits, and I would keep thinking, who are you basing these same pictures on? The thin lips, the high nose, the mole!”

“On Madhumita, of course!”

“The girl who played with me in Tamluk? Remember? She used to forbid me from going to the lake?”

“A girl? You’d roam about the broken palace ground yourself. I myself have seen you several times, talking to yourself, and you’d come and tell me about a princess of the palace! But it was a good thing you never went near the lake, I heard about it later, it wasn’t a very good spot, you know. Apparently, there were murders committed. The last princes left when their small daughter was killed and drowned in the lake for ransom.”

My head was going blank and heavy at the very same time, I refused to register, and asked her, “Wait a minute, you didn’t see Madhumita ever? She used to come with me till our house, I would wave back at her from the veranda?”

“You were an odd kid, one time you told me you had a friend from Mars. It was exhausting keeping up with your list of unreal friends. You used to take Vicky for walks in the evening, but then you stopped taking him and he used to drive me mad until you came back home! Poor dog [my mother never got over Vicky’s unfortunate (and unrelated) death]!”

Two years ago, my mother’s ex-colleague, Halim Uncle, invited us over to Tamluk for his daughter’s wedding. Neha-di was much older than me, but her sister, Sneha, was a year younger to me. The first night I went to Tamluk, I caught hold of her and asked, “Do you know Madhumita? I used to play with her, she must be from around here?” It was, like I had said, a tiny fringe of town, everyone knew everyone and nothing ever really changed.

Sneha looked at me uncomfortably and said, “After you left, I’ve never really thought much about it, but now that I do, you did talk a lot about some princess from the Rajbari a lot whenever you’d visit us. I think you should know this, the last kings of Tamluk had a lot of internal strife regarding property and money and political pressures, there were a few claimants, siblings and cousins, of the palace and by then the palace itself wasn’t very secure, the wealth was gone, kingship was gone long ago. One of their kin-members had apparently kidnapped the child-princess Madhumita and had drowned her in the lake. This is what we have been hearing about the Tamluk kings for as long as I can remember. No one goes to the lake, especially in the afternoon. It’s not safe, I think there are thugs and drunkards always lurking about or something.”

“Is it still there? The Rajbari?”

“What Rajbari? The palace had broken up years ago, even before we were born. There was only a vast dump-yard of bricks and stones.”

“No building?” this was getting more and more insane. I still remember walking up along the staircases, the brick floors, the balconies, the long ledges.

“None! It was so uncanny listening to you go on about palaces, but I don’t remember most of what you’d say, it was such a long time ago…! And in any case, the palace was far away from your house, it would take a walk of a good twenty minutes from the place you guys had rented. We never understood why you’d walk that far and go to play in a literal ruin and keep saying that you lived right next to it!” she laughed, as I cringed in unknown discomfort and eeriness.

I was determined to visit the palace and the lake in the afternoon, the following day. When I woke up in the morning and walked down the stairs, for some unfathomable reason, my very flat shoe twisted my ankle and I ended up not moving anywhere without my mother for the entire week.

Kajori Patra has recently completed her M.A. degree in English from Jadavpur University. She likes to read Bangla KidLit and is often accused of being ‘childish’ in her choice of literature. She was also (oddly) in the Organizing Team of JUDE x ACLiSA Children’s and YA Literature Conference 2022. She also has an Academia account to fool KidLit scholars into taking her seriously: . Hopefully, the government(?) will fund her odd obsession with Bangla KidLit someday. She can be found at @bookisque on Instagram and @not_cleopatra on Twitter.