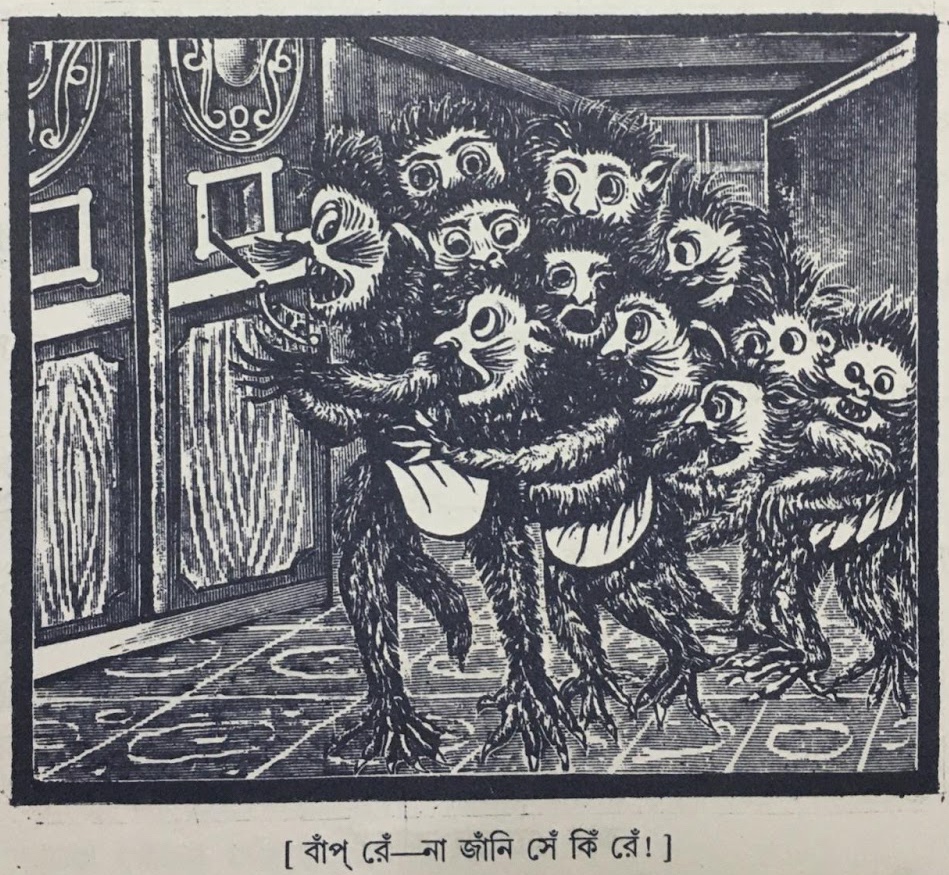 Sort of loses the charm when I translate it to English…

Growing up in a Bengali household, this high-pitched nasal catchphrase was a source of both giggle and terror. My grandmother used to sing this aloud when she was in a playful mood or very eager to put me to sleep. Ghost stories in Bangla or Bhooter Golpo (as they are popularly called) used to be a ritual before bedtime, during adda (tea ‘n chill) sessions or every time there was a power cut! These stories were used not only to make us eat, sleep or tempt us to come home early from play, but also as means to escape into imaginary and romantic worlds of our own – dreamy, old worlds filled with ancient kings and queens, flying horses, princesses and demons. Worlds of fantasy and adventure, rather than fear.

The classification of Bengali ghosts is very fascinating. For me, bedtime stories were non-negotiable – so much so that I would refuse to sleep without one. So my grandmother had to repurpose the same ghosts in different scenarios. I remember a few of those distinct personalities that would feature across many of these stories.

One was called Brahmadaitya – as the name suggests, it was a towering Brahmin spirit who lived in a Banyan tree and had a kind, benevolent nature. This ghost used to help other struggling Brahmins, overcome the loss of farm lands that were wrongfully seized by the king, enabling them to become emancipated.

Then there was Shankchunni (or petni), the naughty female spirit with fangs and long hair, known for cursing those who did not believe in her existence. She would put a spell on someone’s hair, turn them into dreadlocks and build a nest inside.

Safe to say, these lores have now found relevance in everyday jibes and metaphors too…‘oh, he is really big like a Brahmadaitya’ or ‘she laughs loudly like a petni.’

Another common character was Nishi, a sub category within petnis. This nocturnal spirit would come to your window at night and call out your name (also referred to as nishir daak). On responding to her calls, she would trick you into following her. One version of this story entails the Nishi taking you to the woods, killing you and storing your soul in a tender coconut! Some say that before turning into a petni, she used to be a victim of domestic abuse.

From Bhooter Raja (the king of ghosts) in Satyajit Ray’s Goopi Gayin, Bagha Bayin to Thakumar Jhuli (paternal grandmother’s bag of stories), we get to see undeniable creativity and art in the ghost stories that make up a typical middle class Bengali childhood. In the former, black & white classic, Ray’s depiction of the dance of ghosts was an unimaginable feat back in those days. This scene showed ghosts from different social strata and ethnicity, engaging in their native dance forms and socialising in elite parties.

The latter, Thakumar Jhuli, is a collection of stories that is part and parcel of every Bengali household. The collection  came into being as a result of a 1907 ethnographic study by Dakshinaranjan Mitra, who travelled from one village to another in rural Bengal (then undivided) in search of captivating folk tales told to little children by the older women in these villages. My guess is that the reference to the paternal side comes from the customary shift in residence of the wife from her own home to the husband’s, after marriage. Hence, children would grow up there and would be exposed to the stories of thakuma, instead of didu (maternal grandmother).

This collection featured gallant knights, two-headed snakes, flesh-eating demons, sleeping fairies, talking frogs, golden birds, pirates, oceans of milk, a pandit who was a fox and magical owls who could speak. Even though these characters did not fall directly within the realm of classical ghosts, they rode the thin line between the supernatural, the mystical and the magical. These stories were accompanied by beautiful illustrations, with an eerie yet enthralling side to it. .

In one of the images from the story “Neelkamal Aar Laalkamal” titled “Khoob Jorey Ta-n-n-n-n”, the realistic depiction of the creatures with sharp spikes, furry limbs and human-like expressions (yet gorged on human flesh) changed the way I used to think of ghosts as a child. When the lights would be turned off, I would be worried about these monsters, not spirits or ghosts.

In another image, from the same story (titled “Doley Doley Lok Polailo”), one notices a kingdom under a cloudy sky, where all humans are shown fleeing their homes because of the monsters. The text goes on to paint a picture of every house and every road littered with human bones. In hindsight, it sounds somewhat dark for a children’s storybook, but we (my sister and I) used to relish it. And, it was not always the emotion of fear that these stories invoked in us.

I would find myself feeling sad for some of these monsters, such as the one in the third image, from the same story, titled “Aamar Neelu Aamar Natu”. The story is about an elderly rakshas mother (depicted by the sagging skin and the sad, droopy eyes) who while grieving her lost children, mistook the human princes (who had come to slay her) as her own and starts cradling them – therefore the poignant face. A similar moment is captured in the last image from the same story titled “O Ma!”, where the rakshas mother grieves her son’s severed head and vows to take revenge on the humans who killed him.

The artwork in this book continues to mesmerise me, even today. Essentially, bhoot in Bengal never was restricted to spirits or the supernatural alone, but more about the mystical and the magical, with very human-like manifestations yet inherently Bengali still.

The most amusing (although not at the time) one was the rakshas (monsters) who used to presumably live under my bed. Didu convinced me that if I don’t  cover my feet at night, the rakshas would come and pluck my little toes like ‘fish-fingers’. Then she would turn to my sister and tell her that the khokhhosh, a mini version of the rakshas, would do the same to her. I remember a few more ghosts who would make guest appearances in her stories, like skondhokata (the headless ghost in pursuit of his lost head), mamdo bhoot (Muslim ghosts who would twist necks), gecho bhoot (a ghost that lives in trees), betaal (evil spirits residing in charnel grounds) and jinn (a spirit with both good & bad nature, according to Bengali-speaking Muslim communities).

In retrospect, I am completely overwhelmed by the sudden urge to revisit these memories. Storytime with Didu used to be the part of the day I always looked forward to. It continues to be one of my warmest and earliest childhood memories, and perhaps the reason why I love ghost stories so much! Didu’s role in my early years of imaginative thinking was instrumental and inspiring, and it feels nice to have come out of a writer’s block with this excerpt which, perhaps, is my tribute to her.

Madhuwanti Mitro is a social science researcher, currently doing her PhD as an ICSSR fellow, at Institute for Social and Economic Change, Bangalore. Her research lies in understanding space, early childhood and migrant children.