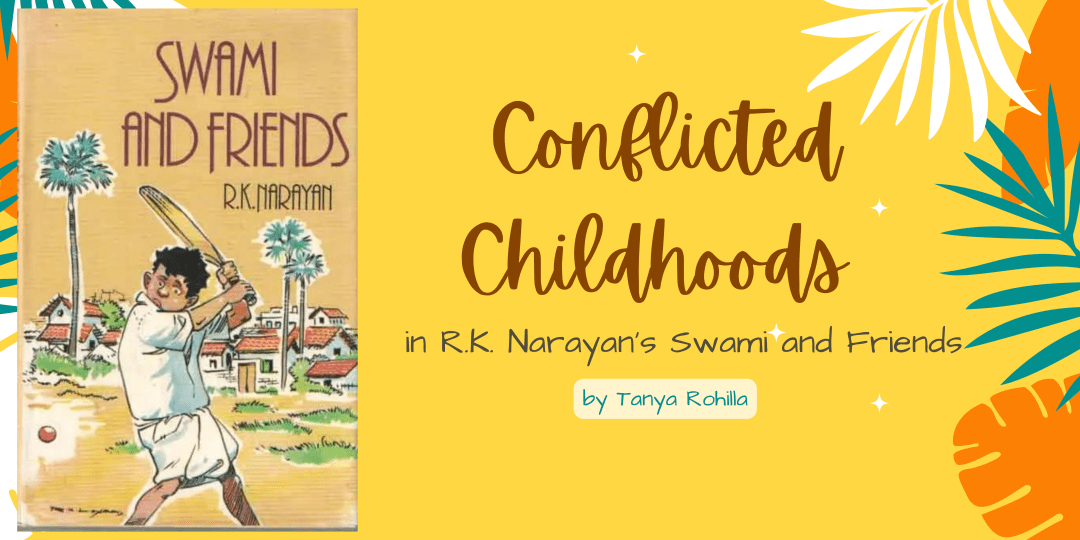 “I am beginning to feel of late that I have Delirium”

When it comes to the narratives centred around a juvenile consciousness evolving during colonial India, there are only a few and fewer amongst those who have done justice to it. Children, irrespective of the temporal and spatial bounds have been treated as secondary subjects in a majority of the narratives, like empty apparatuses to pour down the dominant ideologies or worse, treated like a neglected plant that witnesses everything from a distance. There are only a few narratives from India written in English during the British rule that explore the schoolboy psychology in immense depth. R.K Narayan’s Swami and Friends (1935) advances this trope and extends its boundaries from childish comedic observations to innocent questioning and misguided actions without drawing a fence around didacticism and morality.

Swami and Friends is essentially a schoolboy fiction whose characters are navigating through their inner states of mind while growing up in a state full of conflicts – national, social, political and cultural. Childhood, as a category, has no strict definition as the treatment of the idea of a child is itself very permeable and is always in alterity. Narayan’s text weaves a tapestry of numerous childhoods within a single social setting all interconnected through social relations. This article shall focus on the three central characters, the eponymous protagonist Swaminathan (Swami) and his friends Mani and Rajam and study the difference in the treatments of all the characters influenced by several factors governing the social and political scene around them. The child characters in the novel try to mediate between conflicting ideologies and opposing ways of being instructed by larger power structures operating around them.

The novella was written and published at the cusp of the Indian struggle for Independence and thus conflict remains a core theme of the text. It is no surprise that the inner states of mind of the characters would be any different from the external turmoil and the unfortunate series of events that unfold in front of them. However, the experience of a protagonist’s consciousness is affected more when the protagonist is a child due to the crucial age of development of thought process and understanding of one’s surroundings. In any society, children don’t possess any autonomy and are not the primary decision-makers of the events happening to and around them. Nevertheless, Swami and Friends, primarily through Swami’s point of view and retrospections, without mockery and assumed superiority delivers the child’s perspective comprehensively. The children in the novel are facing internal conflicts and if one may be so bold to suggest, the children, parallel to the entire nation, are facing an identity crisis where they are actively being pulled into different directions. These colonial juveniles in the novel are constantly tugged between the traditions and familial values versus the British and Christian missionary influences. This is the very conflict that created and divided both nationalists and clerical babus of the Raj. The two institutions, Family and School were largely responsible for moulding the idea of childhood and in extension, the very idea of being for these children and the conflict posed by the two stretched to all the areas of their lives.

Even though Narayan has delineated Swami’s perspective and his retrospection of events and people around him, his opinion of other characters and his actions around them are puppeteered by such larger apparatuses. Educational institutes that generally function as ideological state apparatuses almost become repressive state apparatuses when they use repressive means to discipline their students like corporal punishments and suspensions. School in Swami and Friends remained largely a site of confusion and conflicts rather than a place to gain knowledge and wisdom. These institutions that govern a significant part of a school boy’s life are invaded by propaganda and become sites of interpellation. The social setting of the text is far from being secular and from a juvenile perspective, between waves of rebellions (peaceful or otherwise) against the British and submissive strategies to calm them down, tracing and pinpointing the exact points of conflict is as futile as it is rhizomatic reflecting Swami’s vivid imagination. School and families provide a physical area to materialize this conflict as childhoods remained the chief sites of contestation.

Moreover, the place where the characters, especially Swami, feel most confronted is ironically a place where he must go to clear all his doubts. The school serves as not only one of the most intimidating places for Swami but also a place where he feels a sharp clash between what is taught in his traditional Hindu home and the lessons he learns in school. Colonial pedagogic institutions were not only agents of imparting knowledge but they also propagated Christianity. Both schools and families are a part of the Ideological State Apparatuses as proposed by Louis Althusser and both play a crucial role in the development of a child’s ideology and consciousness and perspective of the environment. Children provide the perfect mould for such apparatuses to propagate their ideologies and childhood becomes a contested site for power play by adults. Swaminathan comes from a Hindu family and is appalled by the expletives his Christian scripture teacher Mr. Ebenezer delivers towards his religion and his gods. Swami naturally protests this and his objections are reflective of his upbringing as a Brahmin boy:

Swaminathan’s blood boiled. He got up and asked, “If he did not, why was he crucified?” The teacher told him that he might come to him at the end of the period and learn it in private. Emboldened by this mild reply, Swaminathan poses another question, “If he was a god, why did he eat flesh and fish and drink wine?” As a brahmin boy it was inconceivable to him that a god should be a non-vegetarian. (Narayan 4)

The merging of pedagogical institutions with the religious agenda and familial setting with the Indian nationalist/Colonial propaganda left many child characters in the novel abandoned and perplexed.

Swaminathan, Mani, and Rajam are the three children who despite belonging to the same institution, Albert Mission School in Malgudi, hail from diverse backgrounds. Sharing different ideologies and emerging from varying social standings, none of the children have active control over the development of their personalities that become their characteristic feature. The treatment of children in the novel by other children as well as the adults is reflective of their status in society. Swami, who is hardly given any central importance at home, is treated the same way by his friends. Mani, hailing from an obscure familial background, lives with a frightening uncle and thus outside the home, he adopts a similar persona of a bully and a rogue. Similarly, Rajam who is the son of a police superintendent is treated with respect by teachers and his peers. Additionally, Rajam assumes an air of superiority in front of his servants at home synonymous with the superior status his father has in the society that appalls Swami and Mani. Despite all of them being children belonging to the same age group, some children are treated in a more childlike manner than others.

The depiction of such tempestuous adolescent years are, especially against the backdrop of the National Freedom Struggle, appears to have resonances with Shakespeare’s The Tempest. Mani, who represents the native Indian and the original power centre of his friend group, echoes Caliban. Rajam, the anglicized native who, in extension to his family, is an agent of colonial agenda resonates with Ariel whose actions and manners are governed by Prospero (Colonial Power). While Mani represents the native Indian in a crude form, Rajam is the more refined Indian who threatens Mani’s hold over his friend group. Before Rajam’s arrival, all the other children are shown to be afraid of Mani, trying to stay in his good graces but later their alliances also begin to bend. There is a set hierarchy in the group reflecting the hierarchies in the outer world. The friend circle in the novel functions as a microcosm of societal groups and power structures and hierarchies get established even more distinctly when resourceful Rajam arrives and destabilizes Mani’s power. The other children in the group feel conflicted about siding with either of the two powerful parties. Not only do one’s peers become reflective of one’s power in a friend group or a social circle but also children develop a sense of identity based on others around them, be it adults or fellow children.

Towards the end of the novel, easily persuasive Swami who undergoes a series of trivial and some not-so-trivial events, develops a clearer sense of his identity which could not be swayed easily. However, a grey space governs the overall development of children in the novel, including Swami’s, where all of them navigate their social and personal lives amidst the political upheaval. The treatment of childhood and children are varied as the socio-economic class of the respective families and in numerous cases, children mirror adult tactics to gain control and power either through physical strength or diplomacy and resourcefulness.

Tanya Rohilla is currently pursuing her PhD in English from University of Delhi. Her research interests are Posthuman studies, children’s literature and Modernist fiction. She is a postgraduate in English from Jawaharlal Nehru University. She can be found in corners discussing Jane Austen over iced coffees and occasionally quoting Hamlet out of the blue.