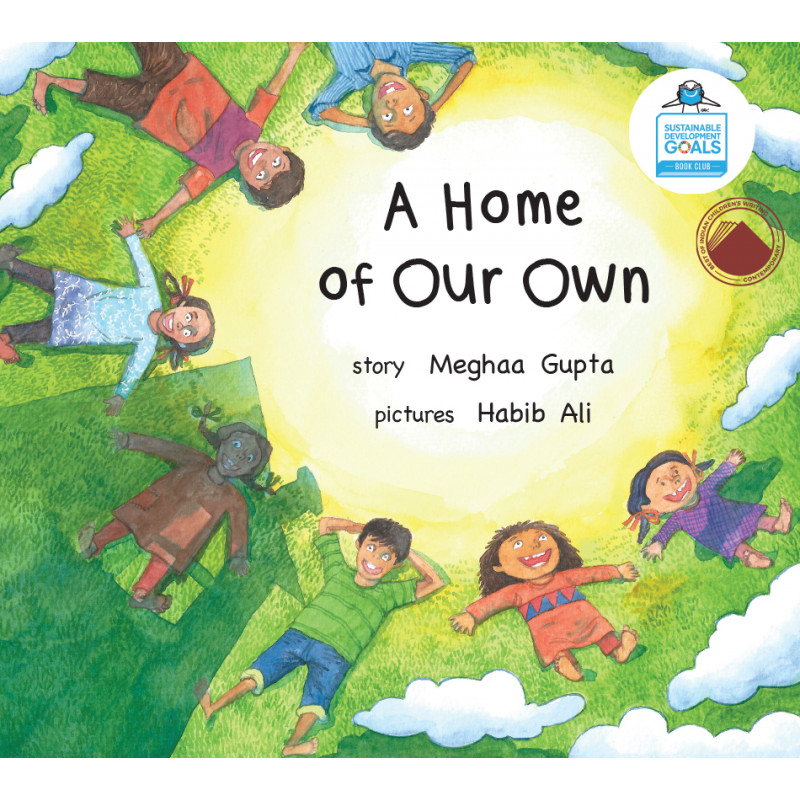 In 2021, I had the privilege of being shortlisted for an award celebrating women writers. Much has been said about the historical neglect of women in virtually every walk of life, including writing. However, as a woman working in children’s publishing, I can hardly recall a time when I felt discriminated because of my gender. But, on many occasions I have felt somewhat belittled because I work in children’s publishing and write for children.

I remember the fervent pride with which I showed people my first book, a 500-word picture book capturing a day in the lives of street children. However, my enthusiasm was often met with polite, indifferent smiles that seemed to convey that I was making too much out of nothing. That writing an itsy-bitsy children’s picture book did not qualify me as a bona-fide writer. The overriding sentiment being that writing for children is easy enough and anyone can do it.

Another incident from my life that corroborates such a mindset happened when I commented that a manuscript “needed polishing” and “the ending had to be reworked”. The writer promptly shot back, stating that “the writing was surely good enough to become a children’s book!” My immediate urge was to send a volley of uninhibited insults at the person. Of course, I didn’t do that. Needless to say, I still feel like a wimp for not meeting presumptuous arrogance with a dose of its own bitter medicine.

Children’s writing is not easier or more difficult than writing for adults. It’s just different. As a ‘children’s writer’ I search for ways of communicating my thoughts, ideas, and research with an audience that may not have the same vocabulary or insight as me. I seek to write in a way the youngest person in the room can engage with my work. But that, in no way means that the oldest person can’t or should not engage with it. As a reader, if the writing and the subject interest me, I hardly ever pause to consider whether I’m picking up a children’s book or not. I have been moved as much by the depictions of poverty in Eklavya’s picture book, Payal is Lost as in Katherine Boo’s Behind the Beautiful Forevers. Yet, in a world run by adults, I often encounter a general prejudice when it comes to children’s literature.

In a country with close to 400 million children, the poor exposure given to children’s literature says volumes about the empty-speak we indulge in when we talk of the merits of reading. A nation that’s genuinely interested in promoting literacy will value good children’s literature and will work towards building a strong, inclusive ecosystem to develop, publish, distribute and promote these books as widely as possible. Every time I say this, I’m informed about the innumerable NGOs that go the extra mile in pushing children’s books and the ‘Bal Sahitya’ award that was instituted by the Sahitya Akademi in 2010. While I will never deny the importance of these initiatives, the problem is that somehow, without meaning to, we have reduced children’s publishing to a ‘charity case’.

At every World Book Fair that I’ve attended, I’ve been asked for free books because children’s literature is ‘so important’ that it should be made ‘freely available’, so that every child can have access to it. If children’s literature is so important, why can’t you spare decent money for it? When I say this, I’m promptly told that India is a poor nation and children’s books cannot be a priority when people don’t have enough to eat. I completely understand this. In fact this is why publishers offer generous discounts to organisations that buy books in bulk and take them to children who will not have access to them otherwise. But, it surprises me when even well-heeled institutions and people expect children’s literature to be cheaply priced.

I once attended a meeting where a gentleman loudly proclaimed that children’s books should not cost more than five rupees! I wanted to scream my lungs out. If we price our books at five rupees, how will we, as an industry even stay afloat? How will we pay our staff, our authors, illustrators, and designers? Do you expect us to forever sustain on external funding? Do you know what a difficult, unstable business model that is? And it’s not as if no one has the money to pay for these books. The problem is that Indian children’s literature has been devalued to a level where people don’t consider it an important-enough investment. It angers me when people call Indian children’s books priced above 100 rupees, ‘too expensive’ but think nothing of spending over 300 rupees for international titles. Julia Donaldson and Oliver Jeffers are great, but their books will not give your child the familiar comfort offered by Indian writing. The reason the international names we know became so big is because they come from countries that value their writing and want to take it to the world.

When I attend international children’s book fairs, it bothers me to see how India is practically nowhere on the map. The Indian stall, if there is one, is usually poorly managed and unimaginatively presented. Hardly anyone is talking about our books. Some of them do make it to a few noteworthy listings, such as The White Ravens, the US Board on Books for Young People and the University of Wisconsin-Madison’s South Asia Book Award. But these are not talked about as much as they should be. Not even one Indian author or illustrator features on the prestigious Hans Christian Andersen list. I’m the last person to benchmark our relatively nascent industry to historically-honed international standards. But I am  convinced that we have the talent and we need to champion it wholeheartedly.

The apathy towards Indian children’s books never ceases to surprise me. At an interview, when I asked a prospective candidate to name the books she had read, she could not go past Ruskin Bond. And this is someone who was applying for a job in this industry! It stings to witness such abject ignorance and lack of exposure. I see how it affects people working in this field. The feeling of insecurity, of vanishing into oblivion can be overpowering. After my picture book was published, I wanted to see it out in the world. I was a new author and despite years of working in publishing, I wasn’t entirely immune to the charms of publicity. But after a spate of free promotions and free copies, I began to feel used. If you can’t even spare 200 rupees for my taxi fare and expect me to do a read aloud and also request free copies of my book, you must really take me for a fool. This bitter, first-hand experience hardened me. Now, I do what I can, but sharply turn down people who don’t value my work and time or try and guilt me with their ‘charity’ trope.

So, how does one increase exposure for books? The most common avenues are online and offline reviews, bookstore displays, book clubs, book festivals and awards. Let me dwell on these one by one. Over the years, space for reviewing books has fallen significantly in mainstream media – and it’s worse for children’s books. Additionally, children’s literature is often not a priority for book editors. In fact, one such book editor casually ‘advised’ me to send my book to a ‘mommy blogger’ because her publication didn’t have room for it. I love parents who share their experiences with children’s books online. But carelessly dismissing children’s books as the preserve of ‘mommy bloggers’ is not just blatantly sexist, it’s contemptuous. We need to find more people who know how to review children’s literature, especially picture books. I remember one reviewer who proudly told me that he had reviewed my picture book in a magazine. When I read the ‘review’ I was left aghast! He had simply revealed the entire story. Not a line about what he thought of it – maybe because he didn’t know what to think of such a short story.

Bookstore space is prime real estate and children’s books are usually not prime property. So, expecting a window display at a bookstore is like hoping for a miracle. But there are a handful of booksellers who take children’s literature very seriously. So, if you’re genuinely interested in these books head out to places like Funky Rainbow, Lightroom, Eureka, Kahani Tree, Kool Skool and their ilk and promote them as much as possible.

Book clubs and inspired curators of children’s books are yet to hit the mainstream, but having worked in the industry, I’ve discovered people whose passion for and knowledge of these books keeps me hopeful. In 2010, Swati Roy and M Venkatesh of Eureka sparked off a revolution by starting India’s first and biggest children’s literature festival, Bookaroo. Since then, I’ve witnessed a burgeoning of such festivals in all corners of the country. Yet, I’ve also seen how many of these are run by commercial ignoramuses who only want ‘popular names’ and don’t bother with the books. I have attended many such festivals and spoken to the festival directors about books that deserve more attention. But the disinterest has often put me off.

Finally – the awards. It’s heartening to see that the number of awards being given to children’s books in India has gone up over the last few years. Of course, like everything else in this field, these awards too could use more publicity and mainstreaming. No one’s gunning for a Booker. But is it too much to hope for a JCB or DSC award for Indian children’s literature? Also, a note to award organisers: children’s literature is just as varied as adult literature. Having one token children’s category is hardly representative. A few years back, The Hindu group instituted the Young World-Goodbooks award with separate categories for picture books, illustration, fiction and non-fiction. For once, I felt that someone had thought seriously about awarding children’s literature. So, I was utterly dismayed when the award was discontinued. More recently, the Neev awards and the Atta Galatta Bangalore Literature Festival Book Prize are trying to raise the profile of children’s books and I can only wish them all the luck.

Children’s literature is growing, competition from new imprints is increasing and sales are improving. Yet, it sits on the margins of the publishing industry in India. I may not have a ready solution to this dilemma, but if we keep questioning and talking, I think we may get it at some point. Till then, I’ll continue playing the hopeful underdog and not let any ‘marginalisation’ – whether perceived or real – get to me!

Meghaa Gupta has worked in Indian children’s publishing for over a decade and has authored various books for young and lay readers. She firmly believes that all change begins with getting children to read books that demystify the world and its infinite possibilities. Meghaa curates the children and youth section of the online magazine sustainabilitynext.in and is a co-founder at the Green Literature Festival.The one for which I was nominated: Unearthed: An Environmental History of Independent India (Puffin, 2020). The picture book I’ve referred to: A Home of Our Own (Tulika, 2018). My latest book (in a series with Unearthed): After Midnight: A History of Independent India (Puffin, 2022)