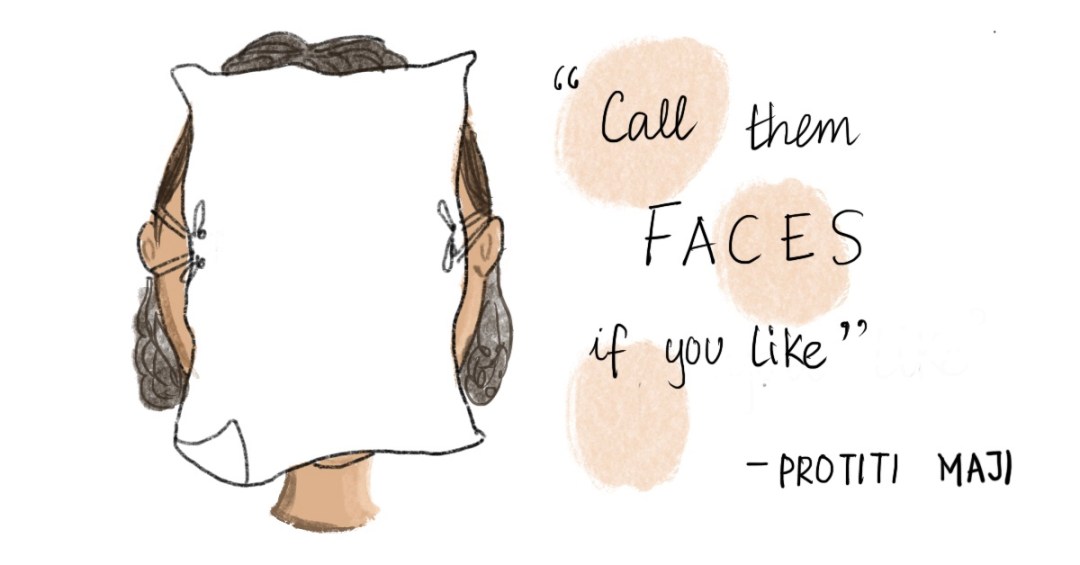 I meet them in the bazaars, in the house of the store keeper, in the walls of the attic, in my history book, from my balcony, while going to school, at father’s new office, in the newspapers, in the temple fairs, in the looking glass, in letters and in the library. They are neighbourly like the trees of the square grounds that obstruct sun rays inclining them to the veranda of Mrs Bakhsh’s flat — so that our clothesline misses the sunny wink and mother gets invective in early morning housekeeping. They can talk, laugh, sing, frown, gossip, sneer and think; I know some nine billion eight hundred fifty four of them, tomorrow there would be more, so I keep counting. I like to read them when in a hurry, they run like the frogs —- ‘splotching’ on the rainy floors when Kalbaisakhi and wet showers hit office hours. They are concessions to recognition — in this ‘amnesian’ world, where we keep looking for the specs, forgetting its use as a hair band atop the skull and that it keeps hairs in place better than wandering eyeballs. They are ill at ease with personalities, ears, nose, eyes, lips – they stick like cheese, though similar in the whole, their individuality is not amiss. Call them faces, if you please.

In election days, when the towns are scored with apparitions, I spot numerous specimens of them scurrying and jarring their brothers. If I insert mnemonics and attempt at remembering one by the other, I end up jumbling homely ones —- father’s whiskers sending alarm when its mother who has bellowed for supper, as if they have a magical power of borrowing or interchanging faces — because mother being askew on a single foot when the cheeky rat escaped, she had hit the cutlery knob with the other toe, and skid like a rocket in middle air from kitchen to the infirmary cursing the swindling ratty, father being the single spectator of the drollery.

They are invictus in Chaitra sales, galloping through crowds by an indefinite will of bargain. I am one of them, I sketch them in my lens. When the shutters of my study put down, I sit to dream, all I see is a blurry mobility — picking noses, knit eyebrows or shouting ‘free, free, free!’

On Sundays auctions I steal faces at Russell Exchange, the antiquity of my city. The auctioneer kicks off the deal, and faces are jumpy. Scowling or cross, giggling or proud, unnerved or calculating, they jostle idly with skinny scrapbooks, speaking feelings rather than words. In the doctor’s embassy, they are distraught and weary of timeless worries like students for scholarships. In the stadium, on the ramparts of cricket lawns, they look excited and cheery, as if industries have suddenly ceased to bother, as if nothing can rob them off their pleasure but for the naughty weather.

In the pickle bush, they smell like pepper or patent leather, some are spicy, some salty, some a chocolate brownie. Sneezy faces doth a tempest bring, sending dust bowls of catarrh round the ceiling.

When the station master sits at luncheon by the railway bogie, faces race at the engine’s hinge, a trillion at a time, vanishing before my eyes. I see them patrolling, shapeless faces of porters, passengers, pedestrians and pickwicks, of cobblers, candidates and cabbage sellers, of bachelors and butchers – all in a maze. They are like Egyptian hieroglyphics, with incomprehensible statistics. So I count emotions, for faces are subtly elusive.

Faces breed in my studio, my little hall of mirrors. They reflect time spaces – butterfly days or squalid breakthroughs. When I was a baby it was a satiny velvet wrapper of the head, though now closely corresponds to a mushroom, being acne fed. That’s where I learnt, faces grow. Taut at birth, silky in infancy, freckled blisters for ‘adolescence-y’, but then the old age is ever wrinkled, you like it or not, it’s with laughter and pink gums sprinkled. Faces remain pretty much the same at youth or age, the handiwork runs dynamic so as to become the mane.

Faces — they are versatile, under the coffee-brown or inky black armour of a wig. Eyes as pearls, nose like a fine bridge made of tin, moist lips or a chiselled chin, together makes a queen. They say its beauty, they call it grace, remember a shallow mind can never win the race. So are those iris, dusky in shrunken flesh, a thumped nose and lips drier than an autumn leaf is defined as the brute of the race. But, goodness is hidden in the matrix of humanity, a prim apple rotten at the heart, apparently takes to treachery. It is a measure of time and space, to a lad of five his mother in threadbare cotton, sunken eyes and unkempt face, is nothing but all the world’s best.

To stop this skirmish between the regal Cleopatra with her flawless airs and the walrus, her busy bone adversary is quite an education, prejudices waging millimetre by millimetre might led to a holocaust, unless you mar the imagination. I admire the proportions of a clown with his white mouthed gaw, scarlet ball of a nose, nimble blue lashes, mid summer yellow lantana hairs and his bloody pout. How he ends the brawl with laughter, his discrete distortions or the fools’ slaughter !

When in love, I believe while unbelieving, I look through photographs tracking faces that I keep forgetting. Incidental frameworks of rainbows and shadows are kept in bondage onto photo papers, that serve for later delights. I sneak into the almirah looking for Dodo’s face, my firm friend in third grade. There she is muddled on the shoals, a sand castle on the making which I would scarcely let scaffold, a fiendish glee on my face – the ambassador of diplomacy. Faces wrought sentiments, sunshine or rainy — the portrait jerks up my keenness, I clatter up to the cradle, hanging on for African Dodo ( she being stationed with Negros following the shift) , the receiver held close to my face, to savour brisk lunacies afresh.

They are galvanised on wooden frames with saw dust and fly ashes, there’s gramma, grandpa, Uncle Jerry, Aunt Mabel and Larry — faces faces everywhere, revolting or sombre; we are a big family of brothers, sisters, nephews and nieces.

Faces are intriguing. It’s hard to crawl into suspicions, a sphere or a square or a trapezium, faces look alike, so I search for expressions. Instead, it’s the squint that I remember, or a wink of the eye, Dodo’s voluptuous grin and mother’s tattletale snarl at the boiling mess on breakfast table.

Invisible are those faces, that are laden with topsy- turvy tresses. I have seen some of them, more often I like to invent them. They are an empty canvas, fresh like soft snow or a puzzle with no set rule, where I put bits of wit and gusto — and work on my own schedule. The radio jockey and his loud face — I haven’t seen him though, but I would never stop short to tell you. His nose is a pucker staff that smells music from precipice or creeks far off, his mouth must be bossy with chitter chatter and useless prophesy. He is unlike Humpty Dumpty, the limerick couple, flashy things in thoughts, that sit on walls with scrambled, egg- beaten faces.

Roughly, an a la-carta of expressions, faces negotiate with dimples, cleft palates or furtive dispositions . “Enough, now come to the point” you demand, in case; thus I say, whenever I think of a figure, I think of a face.

Hello ! I am Protiti from Kolkata. At seventeen, my time fleets with classics, modals and limericks. Harmonium serves as my companion by the noon, while I tinkle my anklets wearied of Taal in sweet monsoon. I look to Van Gogh and Picasso for impressions and portraits, my scrapbooks imprint the pleasure of shading resonances. I take to writing to keep fingers nimble lest they should crumble in want of wriggle. I like to talk indeed a lot and that’s me in short.