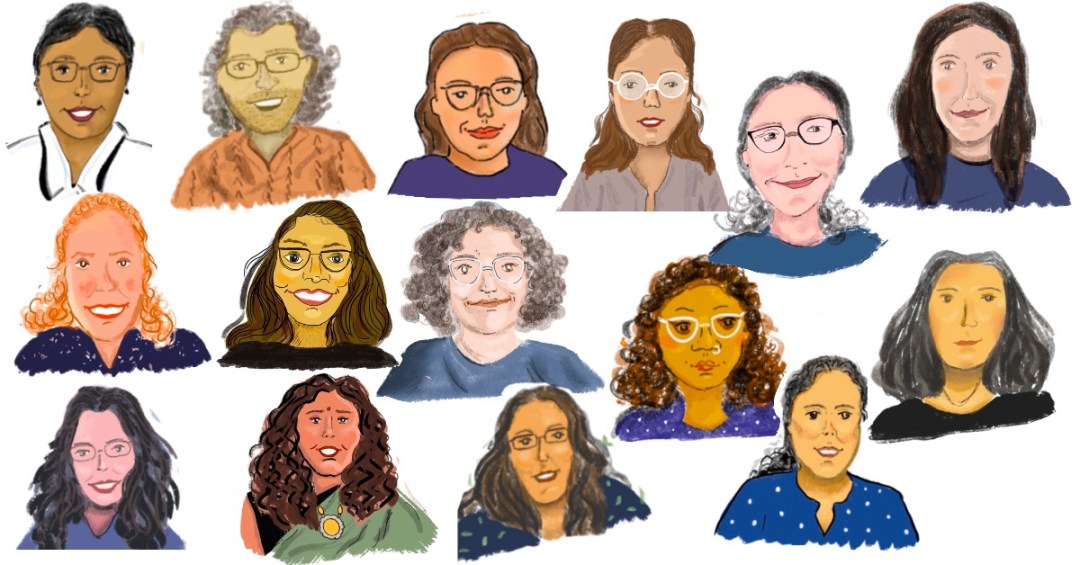 Some Excerpts from our first Conference: Narratives of Criminality, Punishment and Social Justice in CYA Literature

When we started ACLiSA in 2021, we did not imagine that we would be holding our first conference in August 2022, within a year of functioning. Yet, when Ritwika, one of our co-founders, proposed to the team that we collaborate with the Department of English, Jadavpur University, to organize a Children’s & YA Literature conference that the students of the department had been petitioning for, we couldn’t say no. After all, one of our intentions with forming ACLiSA was that we would support and facilitate such opportunities in children’s literature studies in South Asia. Ritwika, who is doing her PhD on contemporary Indian Children’s Literature from JUDE, represented both groups in this, and the rest of the Organizing Committee was rounded off by 3 recently graduated MA students from JUDE – Kajori Patra, Dipanwita Paul & Samragngi Roy, and together they organized Narratives of Criminality, Punishment and Social Justice in Children’s and Young Adult Literature from 5th to 7th August 2022. Ritwika wrote the CFP, Kajori made the posters and website and our first conference was on!

It all came together quite quickly, with around 4.5 months between inception and event, and it grew to proportions beyond our wildest expectations. Originally conceptualized as a 2 day conference, the Organizers decided to extend it to 3 days after an incredible 179 abstracts were received by the deadline. That was not a number we anticipated at any point, but it just spoke to the wide interest in and need for such a conference, to surmise our ACLiSA matriarch Dr. Anurima Chanda’s part of the Welcome Address. The organizing committee, Ahona Das, and Titas Bose from our team agonized over 5 rounds of cuts to select the final 47 presentations that would be presented across 12 panels. It was a tough call by all accounts and so the organizers redirected abstracts which had just missed the final selection to either our blog or the YA Studies Association Conference 2022 that is due to take place later this year. We were once again amazed by the numbers when an overwhelming 353 individuals from 36 countries registered to attend the conference. How were we to even accommodate so many in the Zoom meeting with its limited capacity? So Ritwika spent hours watching YouTube tutorials to learn how to livestream scheduled Zoom meetings on YouTube and we expedited the creation of our YouTube page.

The conference itself went by in a blur of excellent presentations and fascinating discussions, and Ahona captured it all through her live doodles, as seen below. The Keynote Address, titled “Desire and Punishment in Queer Desi YA Literature”, was given by Dr. Poushali Bhadury from Middle Tennessee State University, set the tone for the conference with its focus the controlling of queer desire and representation of queer joy in YA literature in South Asia and the diaspora along its historical, political, and cultural contexts.

On 6th August, an Invited Roundtable was held on the topic “In Flux: Conceptualising Crime, Punishment & Social Justice in CYA Lit” – the speakers were YA author and journalist Payal Dhar; children’s author and documentary filmmaker Samina Mishra; children’s author and Commissioning Editor at Pratham, Bijal Vaccharajani; children’s author, academic and psychologist Dr. Tanu Sree Singh; and the Founder-President of the YA Studies Association, Dr. Leah Phillips. Each of them spoke about the politics of representations of minorities and definitions of criminality and punishment among youth and for youth as they have encountered in their work as authors, scholars and activists.

When we decided to go for another extra day for the conference, we knew we had to schedule something special for Day 3 too! We immediately thought of Dr. Lopamudra Maitra Bajpai, being long-time admirers of her works on folk-lores and fairy-tales, and she agreed to, much to our delight, deliver the special invited talk on “Varied Perceptions Of Social Justice, Transgression and Punishment In The Stories Of ‘Tuntunir Boi” on 7th August. The talk addressed the socio-historical context of Upendrakishore Ray Chowdhury’s Tuntunir Boi, exploring the realities of what constituted crime in colonized Bengal and how the subsequent punishments in the book connected the contemporary political events to the text, drawing upon class struggles during the Raj and Ray Chowdhury’s personal politics.

The first panel, “To Question or Not To Question”, was chaired by Samragngi Roy, where Durba Mandal, Ankana Bag, Vera Velheiuzen and Rizia Begum Laskar spoke on various aspects of childhood in detective fictions, especially, the multifarious approaches of a vast range of authors, from Satyajit Ray to Carl Hiaasen, Enid Blyton and picture books, towards detective fictions targeted towards the child-reader where children take multiple roles of the detective, assistant to even accomplice in crime. With this extremely diverse panel that pingponged the brains of the audience to various directions of nostalgia, the conference already seemed like a delightfully exhausting endeavor! Our Panel 2 had one of our best highlights, the visually enthralling presentation from CiNi by Divya Jyoti Tirkey. Titled as “The Personal and the Political” and chaired by Dipanwita Paul, this panel had delegates, Dr. Sreemoyee Dasgupta, Hiranmay Roy, Divya Jyoti Tirkey (and Mamura Khan), speaking on the various ways of portraying social justice in KidLit and YALit. Dr. Dasgupta argued compellingly regarding the concept of justice for children in Tagore’s Icchapuran which inevitably also brought up justice for girl-child in the similar contexts of Samapti and other texts, and Hiranmay Roy gave a vivid presentation on Raj Comics, a trip down the memory lane indeed. Panel 3, “Interrogating the Criminalization of the Non-white Child” opened up a much-debated topic of racial profiling of ‘criminal teens’ through a vast range of texts belonging to quite different times of, ironically, the same discriminatory history, from Jungle Books to The Hate U Give, the panelists, Ilhem Bellal, Akshika Goel, Deepannita Kundu, Tanishka Aggarwal, Aishwarya Subramaniam and Sreepurna Dutta, discussed how various texts portray the coloured children as criminals, forcing them to adapt to this white-narrative. The final panel of the day, “Justice and Injustice”, chaired by Ritwika Roy focused on the more legal aspects of crimes committed against and committed by children, thus encouraging a mutual exchange between the delegates, Jamie M Fine, Astyartha Das, Asawari Tripathi and Manualla D. Rosario, about the nature of crimes and offenses that children become parts of, on both the ends of the spectrum of justice.

The first panel for the second day, Panel 5 “Marginalized Girlhood and Assertion of Agency”, was chaired by Dr. Sreemoyee Dasgupta, and what we had envisioned as a short mini-panel turned into a multidimensional discussion on various different understandings of girlhood and the inherent criminalization of it in works of a wide group of texts belonging from different post-colonial backgrounds, looping in criminalization of girlhood in the socio-religious contexts through the papers presented by Sohini Dasgupta, Reham Almutairi and Stella Chitralekha Biswas. Right after our insightful round table, Panel 6 chaired by Sritama Chatterjee, “Crimes of Our Fathers” (we happily give Ritwika brownie points for coming up with the panel names) accommodated Sucharita Sarkar, Ranjana Sarkar, Jaqueline Williams, Chandrakala Ghosh and Hiranya Ghosh, who explored various dynamics of the family as site of crimes against children and as the source of criminal behavior in children, while at the same time, the papers traced the acts of childhood resistance and reclamation of power by the children through narratives against parental control. Panel 7, “South Asian Childhoods”, chaired by Titas Bose, had the opportunity to be able to contain an extremely interesting dialogic presentation by Shashikala Narnaware and Ragini Lalit, in a paper and subsequent bilingual interview, as well as brilliant papers by Samarth Singhal and Tonisha Guin representing the realities of crime and the depiction of them in texts meant for and primality featuring the South Asian children and young adults. Panel 8, “Voiceless and Vocal”, chaired by Dr. Nandini Chandra, consisted of an unexpectedly vast array of approaches towards understanding agencies of children through writing plans designed for children, punishments in schools and acts of resistance in various children’s texts, such as Lanny and Paracuellos. The speakers, Macarena García-González, Valentina Errázuriz, Ignacia Saona Urmaneta, Nandini Dhar, Nikhita Thomas and Apabrita Mitra Sarkar, provided their unique perspectives on various childhood acts that becomes the focal points of texts which revolve around childhood agencies.

Panel 9, “The Dead Past (Will Not) Bury Its Dead” had one of our most awaited delegate lists, comprising Phillip Serrato, Tania Cerqueira, Alokparna Sen and Dani Nouriazad. The ‘Gothic’ panel, as we fondly called it, was chaired by Dr. Subhasree Basu and created quite the buzz as it approached what were atypical ghost stories for children, ranging from Schoolhouse Gothic to Lincoln in the Bardo to Pagla Saheber Kobor, talking about the fascinating diversity in the nature of ghosts in these books, from grief and mourning that transforms into ghosts, to regimes that oppress children creating psychological hauntings, to retributive ghosts who are better judges of criminals than live people! Panel 10 “Changing the Narrative” followed, in a happy coincidence (or, was it?), the Special Invited Lecture by Dr. Maitra Bajpai, whose work on Bengali folk tales has been inspiring for many of us. It was chaired by Raahi Adhya and it was indeed a brief and extremely information-packed tour through what has been an integral part of our childhoods, fairytales and retellings of them, by Franziska O Y Cheng, Iasmina-Katia Otolu, Barishan Ray and Elizabeth Ritsema, who addressed topics from Bengali Thakurma’r Jhuli to Disney movies and other contemporary narratives of popular myths. In Panel 11 “When the Old Order Changeth”, we unfortunately missed two presenters due to their personal reasons, but we had the pleasure of listening to Bhasha Mandal, Pubali Dasgupta and Deblina Hazra in this panel chaired by Dr. Anurima Chanda (who kindly helped us through the sea of technical difficulties we faced during this panel!). The delegates spoke on what we, as Indian audience, could deeply connect with, the acts of resistance offered in humorous narratives of Indian childhoods in works of RK Narayan, Shibram Chakrabarty, Shyamal Gangopadhyay, Upendrakishore Ray Chowdhury and other authors who have carefully crafted the childhood of every Bengali kid. With Panel 12 “Off With Their Heads!”, chaired by Dr. Rimi B. Chatterjee, the conference was coming to an unofficial end, as the delegates, Rebecca William, Ragesree Roy, Anagha Gopal and Arun Abraham Varghese approached texts that have existed as the center of pop-culture for years, Harry Potter and Pinocchio, as well texts that are less common, such as The Poet X or Kindergarten stories, discussing the power imbalances between adults and children not just within the story, but also beyond the text, between the adult authors and child or YA readers.

The conference was truly a dream come true for us, and it could not have happened without the support of a few people – largely the faculty at JUDE and our dear friends at YASA who have cheered us on since we began our journey as ACLiSA. We hope that in time we can hold many more such events – there has certainly been feedback that this should be an annual or biannual event! We don’t know if that is possible just yet but we’re sure this is the first of many such. Meanwhile, we will continue to foster and support the development of children’s literature studies in South Asia, and hope it makes a difference.

One thought on “Some Excerpts from our first Conference: Narratives of Criminality, Punishment and Social Justice in CYA Literature”