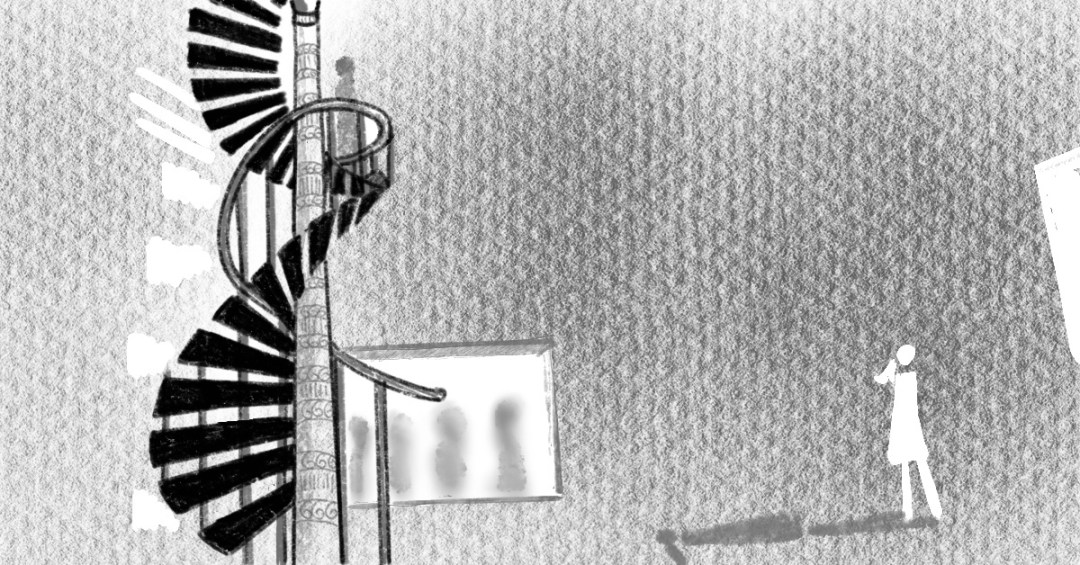 I heard this story from a friend in college. During  my undergrad years, rainy days in college would be ideal for exchanging weird tales and horror stories. We would climb up to the third floor of the main building, which donned a dilapidated eerie look once the cacophony of voices died down after classes got over in the evening. The hanging cobwebs, filled to the brim with ancient “heritage” dust, would grow thick in the dark; the gigantic doors and windows would add to the suspense by creaking at odd hours. One or two owls would screech; a couple of rodents would scurry by.

My friend’s mother has some blood associations with a royal Rajput family because of which they own a palatial mansion in a mufassal area of Jhargram. Over time, the family had dwindled and the younger generation had migrated out, leaving the mansion to be taken care of by a local caretaker. However, while in college, my friend (let’s call him Ruku) would visit the property with his friends or cousins, and make a weekend trip out of it. Even though we got invited many times, after hearing the story of a creepy incident that took place there, we were bound to have second thoughts.

During one such weekend trip, Ruku and his cousins were gathered on the balcony at the backside of the house, chatting and playing games. The house, like many other old mansions in Bengal, is wide rather than tall, and this massive second floor balcony looks over the backyard lawn. Beyond the lawn, on the other side of the perimeter fence, there is a Kali temple — the idol of Kali considered quite jagrato by the locals — surrounding which an akhra had developed. Some time back, there were whispers of human sacrifice taking place in the temple premises, and all of the locality’s anti-social activities got linked to the place. In order to prevent any mishap, a big wall was constructed obstructing the path from the front of the house to the backyard, and the perimeter fence was also made sturdier and increased in length. The only way one could access the backyard now was by the spiral iron staircase constructed many years ago to possibly make a segregated entryway for the lower-caste bathroom cleaner. Since no one lived in the house any more, this staircase too was unused and rusty. Weeds and long grass had grown unperturbed over the years and taken over the lawn. The only concrete structure in the lawn was an old open latrine, which was also in ruins.

On this fateful evening, Ruku and his cousins were playing “Truth or Dare”. For those who don’t know, this game consists of spinning a bottle and whoever it lands on is asked to choose between “Truth” and  “Dare”. “Truth” forces the person to give an honest answer to an embarrassing or secret question, and “Dare” lands them with some sort of challenging task. Ruku’s cousin (let’s call her Priya) chose “Dare” on one of her turns, and was asked to climb down the spiral staircase, go near the latrine structure and wave to them from below. It seemed like a pretty simple task, though the darkness, the old dilapidated mansion, and stories of human sacrifice from across the walls, would be enough to scare the wits out of anyone embarking on such a task all alone. But Priya wasn’t too afraid.

Everyone saw her reach the end of the balcony, light her torch, grab the handle of the staircase, and look down. Then they heard her footsteps receding, the metallic thud rhythmically growing softer and softer. Automatically they turned their heads towards the latrine, expecting her to emerge from the shadows. But…she didn’t.

At first they felt she was trying to scare them, and they decided to wait it out. How much longer could she stand in the long grass, with swarms of mosquitoes feasting on her arms and legs? 10 mins? 15? 20? 25? It was almost close to half an hour, when they started feeling a bit uneasy. Unable to control himself, Ruku got up to check. As he stood at the head of the stairs and shone his light, he gave a gasp. There was no sign of her!

Everything turned very chaotic then. Needless to say, everyone panicked and started running around searching for her. They opened all the doors, banged on the windows, calling out her name. Rationally speaking, she could not have come back into the house by any other way than the spiral staircase, and it was next to impossible, leave alone illogical, for her to jump across the perimeter fence. Nonetheless, her terrified cousins left no stone unturned to look for her. They woke up the caretaker, who alerted some of the neighbours, and went through every single room of the house. A whole hour and 15 minutes passed.

Then suddenly, they saw her standing by the latrine, smiling and waving to them on the balcony, as if nothing had happened. Just like she was told to do. They rushed down the staircase to get her.

— Priya, what the hell? Where were you?

Priya had a very puzzled look on her face.

— Where were you all this time?

— Hour? What are you saying? I just went down in front of you guys. Didn’t you hear me?

— Yes we did. And then we couldn’t find you anymore!!!

— But I just went down and came out. Just like you asked me to.

Priya had no awareness that she had disappeared for an hour and a half. For her there had been no rupture in time or consciousness, while others were going crazy looking for her.

There are many unexplained things in this life. That which we do not have any explanation for, we call strange or weird. True, this story does not have a ghost or a tangible paranormal presence, but that does not lessen its weirdness. Not one bit. Every time I recollect Ruku’s voice narrating this story to us in college, I shudder and feel the hairs standing up on my arms. Heaven knows where Priya was for that entire hour, and why she could not understand that so much time had passed.

Titas Bose is one of the co-founders of ACLiSA.

Cat person and resident paleonto-phile, she is the go-to confidante and saviour for juniors from Presidency University, Delhi University and Jawaharlal Nehru University (JNU) from where she pursued her BA, MA and Mphil respectively. Currently pursuing her PhD at the University of Chicago, her research looks into the comparative aspects of twentieth century Indian children’s literature in Bangla, Hindi and Marathi. Her love for children has carried her through the corridors of Cambridge School, Sriniwaspuri where she taught English to middle graders and to Birbhum where she helps organise workshops for children supported by Sayambharataa .