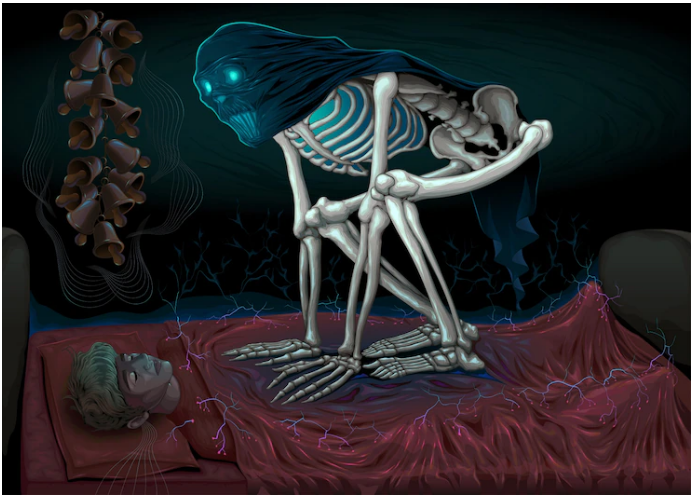 Even in the 21st century we often witness or sense so many unearthly things which cannot be explained by any logic or science. We can’t articulate them by any framework of cause and effect; we just feel or experience them. A very weird kind of feeling.

Twenty eight years old now, I’m going to write about an incident that took place more than a decade ago: a night which I still can’t interpret rationally.

So, almost sixteen years ago, perhaps when I was eleven or twelve years old, I quarreled with my elder sister and decided to shift from our shared room and sleep alone in another room. It was just a random sibling fight but I was so furious that night that I decided to sleep alone in a room. It was indeed a courageous decision for the twelve-year old me who often spent sleepless nights after watching any horror movie, who thought a ghost might be standing in front of her while washing her face even in the daylight.

So, I took my pillow and went to another room to sleep that night. It was a moonlit winter night in a small town in West Bengal, India. Our two-storied building was surrounded by various big trees. As it was a township, our locality was full of trees like it is in villages. Houses were far from each other. That time of night there would be frequent power cuts, so the street lights were off and our locality was in complete darkness.

I was observing from my open window how the branches of the trees trembled in the air and obstructed moonlight from getting inside my room completely. Even in winter, keeping at least one window open was a part of my habit. The moon floated in and out of sight as dark fleeting clouds covered it. I was enjoying the hide and seek played by the clouds and the Moon. It was the coldest day of the season. Everyone in my family, as well as my neighbors, was asleep. There was an unusual silence in our locality except for the occasional crying of the foxes and the sound of the rustling of the trees.

I was lying comfortably under a warm, well-covered, fluffy blanket. While observing the beauty of the night I fell asleep.

I didn’t know how long I slept but I woke up in utter shock gasping and felt something heavy pressing down on my chest. Foxes were howling eerily near my house. An owl flew away with a strange cry. I was feeling claustrophobic, and beads of sweat trickled down my spine. I tried to remove that weight from my chest several times but I failed. In the meantime, my drowsiness was gone and I was completely awake. I heard rough winds blowing outside and saw that the Moon, was completely captured by dark clouds. Everything felt ominous; something unusual was happening.

I wasn’t able to figure out what was on my chest. I wasn’t even able to shout or make a sound. I tried but my voice choked. I was feeling weak. I could hardly move my hands and after several attempts when I almost felt like dying, I gathered all of my strength and was finally successful in moving the burden off my chest. I stretched out my right hand from my blanket on that chilly winter night and just beside me I felt two legs; as if someone was standing beside me. I became stiff in fear but I was determined to discover what it was.

I was still lying on my bed covered by the blanket, just my right hand was out. The rest of my body was completely limp and I started lifting my hand while touching those legs. I was so determined that I had to see how long I could reach and what I could find. I kept lifting my hand while touching the leg and when I came to the knee I felt a human hand hanging beside the knee, just like our hands hang when we stand on the ground. As soon as those fingers touched my hand our fingers locked. It was a cold bony hand and it was trying to pull me up. That was enough for me to shout: “Ma…..a…..aa….” as loudly as I could. I uncovered my face and saw something that I couldn’t identify as a human, but it was pure white and it was just the size of a human. It left my hand immediately and jumped from my bed, ran to the door of my room and leaped out of the balcony beside my room and vanished into the air.

At first, I had thought it was my elder sister trying to scare me, but just at the moment that white human-like thing jumped from the balcony which was fully covered by iron grills, I became sure that it was anything but a living creature. I went to my elder sister’s room that very moment and saw her sleeping.

Trust me, even now while writing I am sweating and feeling puzzled about that night, what was that, and why had that happened to me? I can’t figure it out. But one thing I am sure of is that it failed to do any harm to me because I shouted “Ma…” In our culture we worship many goddesses as ‘Ma’ as our own mother, maybe that blessing saved me that night. After that, I never faced any such spooky incident, and pray I never have to in life.

Multiple award-winning author Plabi Pradhan is the author of Whenever A Poet’s Heart Pops Up, a poetry anthology, besides being a contributor in 15+ national and international anthologies. She was selected among the Top9 writers of India in the Bullet Tales contest in August 2021 by Half Baked Beans Publishing, and as one of the 100writers in the #versesofLove writing contest, held in February 2021 by Notion Press, and her poetry was published in their official anthology. Her story “The Trainer: A Story of Gratitude” won the 3rd position in the Written Olympics contest held by StoryMirror. She was awarded as “Literary Captain” by StoryMirror in July 2021. She has won the position among the selected Top30 writers in the micro tale contest by Verse of Silence Magazine in May 2022 and her micro tale has been published in their booklet.

She has been recently felicitated with the “Fiction – Emerging Author of the Year 2022” Award by Ukiyoto Publishing.