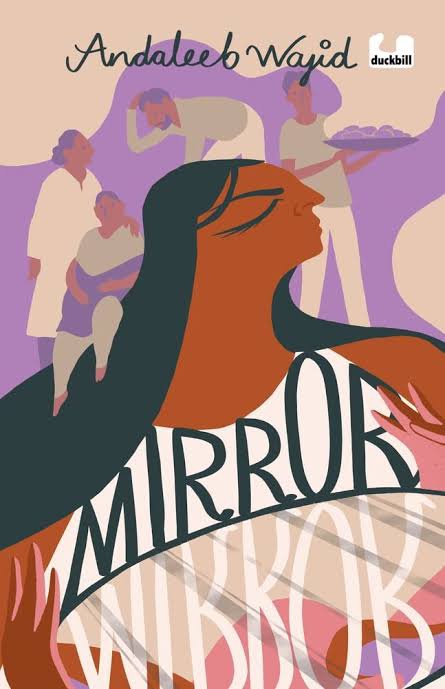 A Review by Anagha Gopal

I glanced at myself in the mirror quickly, bracing myself.

My arms were still chubby in spite of all the yoga, dieting and exercise. The churning in my stomach began as I wondered if I should wear some sort of a shrug to cover them up. Why did I think I could carry off a sleeveless dress? I’d need to diet for another ten years to have the kind of thin arms that I could show off.

Every time she looks in the mirror, Ananya braces herself for the voices in her head that insist on calling her “Fat bitch”, “Ugly cow”, and “Ms. Piggy” (Wajid 31). And, it is not only these names that the voices have in their arsenal. They also hatefully tell Ananya that she isn’t worthy of love and respect, and that she must distance herself from baking, her favourite hobby. Caught in a harmful pursuit of the ‘perfect’ weight, Ananya neglects her health and the things that bring her joy. But things are set to change as Ananya turns seventeen and learns that she must navigate her mother’s unexpected pregnancy and with it, the arrival of her mother’s friend Aunty V and Ananya’s old friend (and current crush!) Raghu. With its layered narrative, interesting plot points, and an insightful voice, Andaleeb Wajid’s Mirror, Mirror narrates the story of a teen on the way to challenge her own internalized thoughts which make her view being fat as inherently negative.

The title of the book brings to mind the recurring dialogue of the Evil Queen from Snow White and the Seven Dwarfs – “Mirror, mirror on the wall, who is the fairest of them all?” But while the queen in the popular fairytale recognizes Snow White as her enemy, for Ananya, it is her own body – “My body was my enemy. Hate, strong and fast, built up inside me, forcing out all other thoughts from my head” (Wajid 36). Ananya falls into the habit of looking in the mirror to direct hate at her body whenever she feels that it restricts her from things that she wants to do, like wearing a sleeveless dress or eating a piece of chocolate. While the narrative qualifies that such behaviour is harmful through the voices of her friends Nisha and Anirudh, and her mother’s friend Aunty V, the book’s true strength lies in presenting Ananya as someone who is aware of her own complex emotions. Ananya knows that her hatred for her body is harmful. When she is referred to a psychiatrist after fainting at school because she hasn’t been eating enough, Ananya quits going after one session as she “didn’t want to talk to someone who might make [her] stop hating [her] body” (Wajid 47). To stop this hate would mean that she could no longer channel it to arrive at what she considers the ‘ideal’ body – “How I wished to be that final version of Ananya already – skinny, with thin arms and a thigh gap” (Wajid 72). Ananya’s self-reflexivity on this front ensures that there is no quick movement in the book from body shame to body positivity. In fact, while it mentions body positivity in passing, the book’s main focus seems to be on the relatively unfamiliar concept of “body neutrality”. According to Anne Poirier, who is credited with popularizing this concept, “Body neutrality prioritizes the body’s function, and what the body can do, rather than its appearance. You don’t have to love it or hate it. You can feel neutral towards it” (quoted in Cowles). As Ananya’s friend Nisha puts it,

…there’s a reason you have to stop hating your body. And like this movement says, you don’t have to love your body either. Just think of your body as a body.

By introducing this concept within Indian YA literature, the book has the potential to address the double shame that fat teens may feel – the internalized shame associated with being fat, and being ashamed of feeling this shame itself, when people around them seem to so easily tell them not to! Interestingly, even body neutrality as a concept isn’t accepted by Ananya at face value. Instead, she discusses her thoughts about it with both Aunty V and her friends Nisha and Anirudh. Moreover, she also allows herself time to reflect on and even question the concept as it pertains to her – “Could it be true,” she wonders, “What did it mean for me?” (Wajid 136). Ananya’s urge to define her relationship with her body on her own terms is perhaps also reflected by the book cover, designed by Harshad Marathe, which shows a defiant Ananya surrounded by her parents, Aunty V, and Raghu, all of whom look puzzled.

In her book, Wajid also sets out to trace the beginnings of Ananya’s current feelings about her body by delving into the past. By showing Ananya recollecting a birthday party that happened five years ago – the first time she heard insults related to her body – the narrative deftly captures a twelve-year-old’s initial excitement and its transformation into confusion and subsequently, shame. Ananya is reminded of this when her childhood friend Raghu, who witnessed her humiliation at the birthday party, re-enters her life. While Ananya develops a crush on Raghu, she also questions his hurtful behaviour five years ago. This allows the book to present the teenage years as both, a period of new experiences, and one of re-examining difficult emotions from childhood. While reading, I found myself wondering whether the effect of the flashback could be even more pronounced if, instead of being recounted all together, it had been spaced out over the course of the narrative, allowing readers to linger over each emotion.

Significantly, however, the flashback helps address one of the book’s important themes – the things that can happen in a child or adolescent’s life without their parents actively noticing. As Ananya thinks about the birthday party, and her journey of navigating her difficult relationship with food, she humourously notes,

I marvelled at how clueless our parents could be. And yet, they were in charge of our lives. How unfair was that?

Ananya’s observation is especially poignant in the wake of her mother’s pregnancy. While her initial reaction is one of embarrassment, she gears up to offer her mother emotional support when the latter is asked to remain in bed rest. Through her mother’s pregnancy, Ananya comes to terms with her own changing position both in her family and the world in general – “I was used to being the only child at home and now…I was no longer a child” (Wajid 53). Ananya’s realization points to an important question – as she grows up and assumes more responsibility, will more channels of communication also open up with her parents?

Even as the book points to the importance of addressing the gap in communication between parents and children, it makes sure to offer strong friendships. Ananya and her friends discuss everything from body image to family, romance, exams, and their academic futures. The book also presents the gestures of care that so often accompany friendships between girls, like Nisha bringing Ananya the crackers that she knows the latter won’t refuse to eat, even as she disapproves of Ananya’s dieting. Wajid offers hope that Nisha and Ananya’s friendship can go on to become a part of their adult lives by mirroring it with Ananya’s mother’s friendship with Aunty V. It is Aunty V that Ananya’s mother calls for support during her difficult pregnancy, instead of her own mother. Through this choice, the book suggests that the communication gap between parents and their children may even be generational.

Overall, I found Mirror, Mirror to be a thoughtful and enjoyable read that tries to authentically voice the emotions and concerns of its teen protagonist. At Rs. 250, the paperback is priced competitively with respect to Indian YA books in English, and is more accessible in comparison to the pricing of international YA books in India. I would recommend it to both, fans of Young Adult (YA) literature, and anyone who is curious about contemporary Indian YA in English. Its examination of body neutrality in particular, I feel, also makes it an important text for scholars of YA literature and fat studies.

Anagha Gopal is currently pursuing her M.Phil. in English at the Centre for English Studies, Jawaharlal Nehru University, New Delhi. Her research interests include the study of form, narration, and authorship in Children’s and Young adult literature.