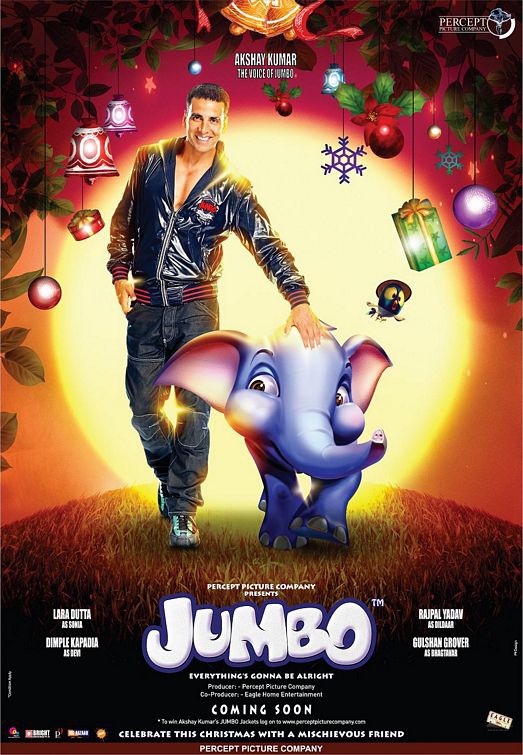 A Hindi redubbing of the Thai film Khan Kluay (Kemgumnird 2006), Jumbo (remade and released in 2006 by Percept Picture Company) is the coming-of-age story of a young elephant, whose desire to find his father takes the form of a hero’s journey. The titular character’s story takes the form of a meta-narrative (a story-within-a-story) that is being told by a man (played by Akshay Kumar) to his young nephew (played by Purav Bhandare). From the onset of the film, the human/non-human conflict is expounded upon. Jumbo (or Jayveer), a newly born calf grows up without knowing his father (Yudhvir), who had been imprisoned by human beings.

Soon after, the audience is treated to a flashback, where Jumbo’s father is depicted as the royal war elephant of the king of Shaktinagar, currently embroiled in a conflict with the neighbouring kingdom of Shauryagarh. The elephants of either kingdom are no less involved in the war than their human riders, and their misplaced hostility towards each other – despite all of them essentially being victims of human imprisonment – is not addressed in the film. Often, the film portrays non-human animals as voiceless subalterns who reel under human oppression, made evident in the scene when Jumbo and his herd flee their territory as well as the history with his father, as discussed below. However, from such a depiction as helpless creatures, the film oscillates back towards glorifying their valiant efforts in human-induced wars, to even deem them as martyrs.

Jumbo’s stance toward the human race is initially one of hostility, borne of ideas that his mother Devi has inculcated within him:

Loosely translated, the aforementioned exchange may be regarded as Devi’s warnings to Jumbo, to never go near humans, because they would abduct him through nefarious means just like they had his father. However, Jumbo’s consequent resentment is tempered with curiosity. History repeats itself when the aforementioned armies of Shauryagarh set up camp in their territory – one night, Jumbo sneaks away and visits the camp to look for his father. He is spotted by the sentries and chased with the intent of capture, further solidifying his hatred for human beings.

However, it is also here that he comes across a gigantic, battle-scarred elephant named Bakhtawar, who is feared by humans and non-humans alike. While escaping from Bakhtawar, he makes his way into the tent of King Vikram, the young prince of Shaktinagar who helps him escape from the sentries. The triumph of Shauryagarh over Shaktinagar had led to Prince Vikram’s imprisonment at the hands of the enemy. His benevolent actions as opposed to those of the sentries of Shauryagarh creates a rigid dichotomy where the kingdoms of Shaktinagar and Shauryagarh are respectively painted as ‘good’ and ‘evil’ – a form of moralism that would spill onto the non-human animals and beasts of burden from either camp. Thus, the seeds of propaganda are sown through Jumbo’s fateful encounter with both Prince Vikram, depicted as the ideal monarch, and Bakhtawar, the ‘evil’ elephant whom the narrative demonizes while choosing to gloss over the fact that he too, is another prisoner of human beings.

Jumbo’s encounter with Prince Vikram is not enough to dispel his distrust of human beings. Enter Sonia, the female elephant set up to be the protagonist’s love interest. Sonia escorts Jumbo to her home, a village of mahouts allied to Shaktinagar. To its credit, the film depicts human beings with nuance – these mahouts are depicted to be benevolent masters, who treat the elephants like family, and who are the victims of the conflict between kingdoms. After the defeat of Shaktinagar, the village is regarded as a rich source of revenue and tax by bandits from Shauryagarh, who routinely visit and loot the village of its grains, supplies and livestock. The very idea of these non-humans being looked upon as property unite these elephants and their mahouts as victims of oppression – however, it places the elephants further down in the hierarchy, where, despite their lack of linguistic ability, they are not even able to articulate their thoughts and grief.

Anne Barcz’s notion of non-human subalterns as the ultimate voiceless victims (Barcz 2017, 33) is brought out by the wide-eyed fear of Jumbo who looks upon the incomprehensible world of humans. A counter-gaze is envisaged that is meta-narratively shared by the protagonist and the audience, but under this gaze, the role of human beings seems to shift. After Jumbo and Sonia are attacked by civets brought in by the raiding bandits, the rest of the village come to their aid. It is through this scene that Jumbo is able to realize that all human beings are not bad, and they – both the mahouts and their steeds – begin their long and arduous training to launch a counter-offensive against the bandits.

A counter-attack they do launch, and Jumbo (now an adult Asian Elephant in his prime) manages to defeat both the leader of the bandits Gabbar and his pet tiger. This victory lends them confidence, and the mahouts decide to bring their elephants to the king’s palace, in order to decide who would be bestowed with the honour of being the royal elephant (‘Shahi Hathi’). The king is none other than Vikram (now an adult), who, after a series of misunderstandings, chooses Jumbo as his royal elephant. Jumbo, on his part, learns about his destiny to best the gigantic Bakhtawar, who had been responsible for Yudhvir’s demise. Jumbo does so, and is celebrated as a hero, reinforcing the mantra introduced at the beginning of the frame narrative – “Everything is going to be all right”.

The film can be divided into two segments, one following Jumbo’s childhood where his (justified) mistrust of human beings is slowly overcome, and his adulthood when he uses his newfound strength in the service of his king. The film portrays him as a brave patriotic elephant and does not question the fact that he has traced the same path that his father Yudhvir used to. In one significant scene where he is chosen as the royal elephant, the camera pans around to showcase Jumbo kneeling down, while King Vikram ascends atop him. Despite portraying several of the human beings as benevolent masters, the dynamics of power invested in the rider/steed dynamic (Patton 2003, 83-99) are not questioned.

Nor does the narrative question the fact that both Yudhvir and Bakhtawar had been captured, had their freedom snatched away before they were broken into servitude towards their respective masters – the citizens of Shaktinagar, depicted to be morally untainted, are still responsible for capturing wild animals for serving their anthropocentric designs of war and transportation. Jumbo’s transition from mistrusting calf to the loyal patriotic elephant is a little abrupt in that light, while his unquestioning servitude and desire to risk his life for a human being’s wartime designs become infused with subtle propaganda.

As such, Jumbo’s seeming adversary shifts from humanity to one of his own kind, almost making it seem like he had succumbed to the very propagandist notion that the latter part of the film seems to espouse. His drastic change of heart imposes jingoistic constraints not only on non-human creatures but meta-narratively infuses similar notions of selfless hyper-nationalism within the audience members (mostly comprising a younger demographic) who identify with and relate to the anthropomorphic elephant. Jumbo is an enjoyable tale, in which a non-human counter-gaze begins to be developed, but the spectacles with which such a gaze is realized, are slowly blurred in favour of patriotic indoctrination through the means of a non-human hero’s journey.

Wolfe, Cary, and Paul Patton. “Language, Power and the Training of Horses.” Essay. In Zoontologies: The Question of the Animal, 83–99. Minneapolis, Minnesota: University of Minnesota Press, 2003.

Sutirtho Roy is an Early Career Scholar affiliated with the University of Calcutta, whose primary research areas as a postgraduate student includes the intersection between post-humanism, environmental humanities and critical animal studies. His research on the depiction of non-human animals in media through a post-anthropocentric gaze has led to several publications in creative and scholarly capacities.

He has also hosted several conferences on post-human studies. He has written a novel which has garnered positive reviews, co-authored an anthology of poetry and has journal articles selected for publication (including Routledge and Palgrave Macmillan). Currently, he works for ensuring justice for non-humans.