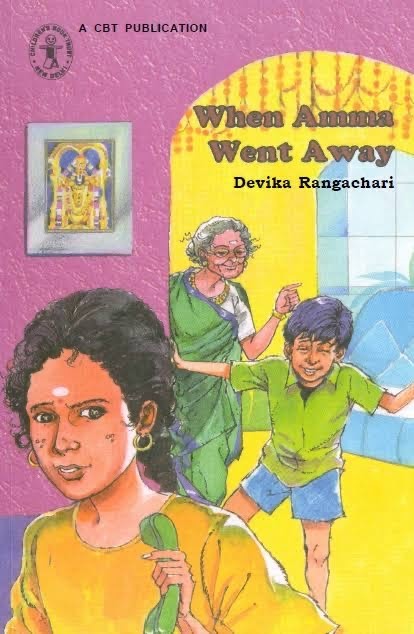 When Amma Went Away

When Nalini finds out that her mother has been selected for a very prestigious research project that only few people ever get a chance in, her heart both fills with pride and breaks. The project is in Singapore and as a result Amma would have to leave them for six months. Slightly older than her little brother Arun, Nalini struggles with her feelings of  helplessness at this news on a delicate anvil of desperation and maturity brought by the realization that Amma shouldn’t have to sacrifice this opportunity for her children. On rising up to the occasion, when Nalini decides she is going to take care of everything and Amma should go for the project she rightly deserves, she is dealt with the final blow: their Patti (meaning grandmother, in Tamil), who they had only met a few times, distantly and “who had never stepped out of her house in Chennai and had never had much to do with her grandchildren except for enquiries in her letters” (Rangachari 9) was going to substitute for Amma.

‘But why Patti?’ began Nalini, her face taking on a stubborn look. ‘She is a hundred years old , at least she looked that when we met her last. She has never been here. Why should she come to Delhi now?’

Nalini  flounced  out  of the  room.  She knew she was behaving badly. She ought to have been happy for Amma’s sake but somehow she could not help herself. She resented the thought of Amma going and anyone else coming to manage their lives. And Patti of all people… (Rangachari 9)

A simple story about girlhood, growing up and relationships especially those between grandmothers and granddaughters, this book deals with the various intricacies of emotions that coming-of-age young girls go through. Nalini contends with feelings of displacement, shame, anger, resentment, loss etc. She fails to understand and has trouble accepting the traditional ways of her grandmother and often struggles to accept her cultural identity as a Tamilian in Delhi. She hates putting on the pauadai her grandmother gifted her (because none of her friends have to and she finds it strange!) but when they visit a temple that evening, Nalini suddenly finds it quite nice to be in as she watches the fabric swirl around her in a soft breeze:

Her contentment is short-lived however, for as soon as they stop by an ice-cream parlour on their way back from the temple, Nalini is seized by a fresh bout of humiliation, shame and  self-consciousness, on coming face-to-face with her least favourite classmates from school:

For, right at the entrance to the parlour near the revolving door, stood Richa, Shalini and one other girl. And they were staring at Nalini with wide-open eyes. The pauadai that had seemed so beautiful in the temple now flapped awkwardly against her ankles, and she felt ridiculous in her strange attire. Richa would surely spread the word in the class. (Rangachari 42)

With her deft use of language Devika Rangachari explores the complicated emotions of coming-of-age girls in India, charting the contours of fear, shame, anger and helplessness that inform their identities and relationships, especially for those estranged from their culture and community. Nalini’s embarrassment of her traditionally attired grandmother showing up for her PTA (Parent-Teachers Appointment) and her subsequent impulsive stint of taking a detour (almost as if to hide her grandmother) at the sight of her friends, depicts the plight of coming-of-age children struggling with their cultural differences in the cosmopolitan societies they inhabit, to the extent of wanting to hide parts of themselves to fit in.  Through this semi-autobiographical account culled from her own childhood memories, Rangachari presents a beautiful pastiche of coming-of-age experiences of women, the problems they face, the difficulties or embarrassments due to language, cultural displacement and shame, generation gap, friendships, peer pressure, adjustment problems, identity confusion and helplessness when a parent moves away. In a humorous yet poignant style, Rangachari fictionalized the difficulties of children from other states growing up in the cultural melting pot of Delhi.