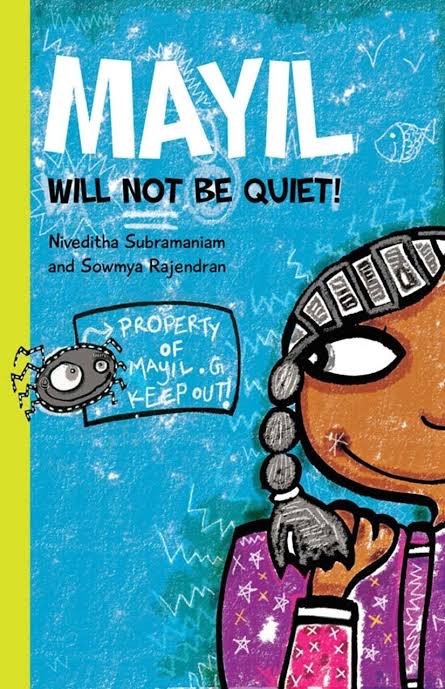 Mayil Will Not Be Quiet!

Mayil Will Not Be Quiet! by Niveditha Subramaniam and Sowmya Rajendran, is the story of young Mayil Ganeshan who refuses to conform. It is a love letter to all young girls who, throughout their childhood and adolescent years, have been asked to keep quiet. At times an Indian Anne Frank or a desi Matilda, Mayil asks difficult questions, contends with the unknown mysteries of life and voices her opinions vociferously. Whether she finds the answers to these questions or not, is irrespective. For Mayil it is important that she thinks and writes and can freely speak her mind. No one, not even her father, can stop her from it. In this twenty-first century Indian English children’s book, narrated in the form of journal entries in Mayil’s secret diary, one thing is clear from the onset, as Mayil decidedly writes: “Mayil will not be quiet!” (Subramaniam and Rajendran 14)

Mayil contends with the established structures of society – why things are the way they are – ruminates upon uncomfortable questions that stump even her parents and subverts gender binaries. Mayil is not afraid to ask, to think aloud. For instance, while listening to the Ramayana from her mother, she is bewildered by King Dasharatha’s desires for a son. “Why didn’t he want a daughter…?” (Subramaniam and Rajendran 9) she asks.

Amma said that the Ramayana is like an onion and that there are stories inside stories, and all you have to do is to keep peeling. I had a question about King D. I didn’t get the part when he says he wants a son to ‘carry’ his name. King D doesn’t have children for a very long time and he wants a son very badly. Why didn’t he want a daughter, I asked her. (Subramaniam and Rajendran 9)

Mayil is an inquisitive child. She doesn’t simply listen to epics handed down to her, but actively engages with the texts, bringing in logic and rationale from her own life. What is the logic behind this preference for a male successor? Why wasn’t the girl-child equally wanted? Her questions stem from a sense of injustice that she couldn’t quite put her fingers on. After all, weren’t there female rulers too? Daughters who grew up to rule their kingdom? Then why was it that King Dasharatha only wanted a son? Tired of her raillery, Amma replies “maybe Dasharatha was afraid his daughter would do nothing but eat vendakka sambar” (Subramaniam and Rajendran 9), making fun of her for her habit of licking her plate clean whenever there was sambar in it. But Mayil is not satisfied with this response. She rallies further on:

So just because I like sambar doesn’t mean I can’t rule a kingdom! Like Jhansi Ki Rani. Or Queen Velu Nachiyar. She fought against the British ages before Lakshmibai but not many people know about her. We learnt about her while studying female freedom fighters in history. They were also daughters and ruled kingdoms, right? (Subramaniam and Rajendran 10)

Often, she has insightful observations, which in spite of or perhaps especially because of her age, her childish innocence and naivety, speak volumes about the small injustices of life. When her little brother Thamarai is bluntly reprimanded by their father, for crying and asked to write “the only thing to fear is fear itself” a hundred times, Mayil gravely observes:

The only thing to fear is fear itself multiplied by hundred.

But Appa is really scared of crows. When they fly past, he ducks but pretends like he didn’t. (Subramaniam and Rajendran 12)

In situating Mayil in a traditional Indian family with unquestioned notions on life and society, this book beautifully brings out the tensions and complications that inform the girlhoods of many such Mayils, coming from such homes. This is a marked shift in contemporary Indian English children’s literature that doesn’t shirk away from sensitive issues but instead, handles these issues delicately with the intent to inform the inquisitive child. Thus, the child readers are introduced to concepts of queerness and transgender bodies, through Mayil’s confusion about the “lady-man” (Subramaniam and Rajendran 16) she sights on a train:

I asked Amma why that man was dressed like that. She said some men just like to pretend they were women. Many girls I know pretend to be boys. In lots of books if there’s a gang of kids, there’s one tomboy. Like George in The Famous Five. Who wants everyone to think she’s a boy. Ki too has short, curly hair and wears shorts all the time. But this was different. I don’t know how but it was. (Subramaniam and Rajendran 15)

I keep thinking of the lady with the roses. They were so pink. It was kind of creepy when I first realised it was a man. But then when she got off the train, she smiled at me. And I didn’t smile back. I feel a little bad about that now. But then Appa didn’t let me sit next to her. Was he scared I would get hurt? But she didn’t look like she would hurt me. (Subramaniam and Rajendran 17)

In spite of her parent’s reactions, Mayil is sensitive to the insensitivities in their behavior to the transgender person. Again when their father forbids Thamarai for playing with Mayil’s doll, being a boy, Mayil is confounded by this sexist dictat:

I thought about what Appa said, and I did some True or False in my head.

Firstly, T has toys of his own. True.

Thirdly, dolls are not for boys. Hmm.

I guess I don’t know many boys who play with dolls. But I remember VS telling me about his dad’s friend who is a collector of antique dolls from all over the world. …But Thamarai likes Mousina more than I do. So, I decided he could have her. (Subramaniam and Rajendran 32)

Mayil has a mind of her own and weighs things according to her own sense of morality. In her inability to articulate the sexisms or discriminations she could emotionally perceive around her, the book makes these concerns more evident. This is a stark shift from previous traditions of children’s literature in India where such issues were deemed too complicated for the mind of a child and thus went unmentioned. As Arunima Chanda notes in “‘Herstory’ in Twenty-First Century Indian English Children’s Literature:Subverting Gender Binaries in Mayil Will Not Be Quiet! and Queen of Ice”:

…what this trend has certainly achieved is an opening of contested spaces within children’s literature. Within this space, one has found more scope for critical engagement with gender rather than the traditional silent acceptance of the insidious conditioning of young minds as embedded in the majority of texts in this genre, which have led to children in India internalizing the strict tenets of sexism. (Chanda 2)

Furthermore, this delightful coming-of-age story explores the contours of social discrepancies to crushes and classroom biases, in a lighthearted yet insightful way. It offers a humorous sketch of the universal patterns of girlhood reflected in the incorrigibly inquisitive Indian girl-child who will not be a mute spectator of her life. Mayil, or aspiring “Mayilwriter” (Subramaniam and Rajendran 62) will have her say. She will tell all the stories she has to tell, even if she can’t quite figure out where each one goes just yet.

Subramaniam, Niveditha, and Sowmya Rajendran. Mayil Will Not Be Quiet! Tulika Publishers, 2011.