A YA Writing Workshop!

A YA Writing Workshop organised by the American Center, Kolkata & ACLiSA

Magical things happen when authors meet aspiring young writers, and on 17th November, 2022, we witnessed just that when the American Center, Kolkata, together with ACLiSA organised a YA writing workshop titled “Writing is Personal: Narratives in Young Adult Literature” during International Education Week. YA author Payal Dhar had joined the event to conduct the workshop in 2 parts with participants from all over West Bengal, which had been preceded by a pre-recorded session with Bengali-American middle-grade and YA author Sayantani DasGupta.

Students from North Bengal University, with Dr. Anurima Chanda, Assistant Professor at Birsa Munda College, Siliguri, as well as a group from Midnapore College (Autonomous) with Dr. Saikat Sarkar traveled overnight to attend the workshop. They were joined by a group from Aliah University, Kolkata, along with Dr. Rohan Hassan.

Dr. Saikat Sarkar with his group of students from Midnapore College (Autonomous) on their way to Kolkata for the workshop.

The day began bright and early on a not-so-cold (climate change!) November morning with an Opening Speech by event convenor Dr. Subhasree Basu greeting the attendees to the workshop which was part of the larger project “Celebrating New Voices in American Literature”. This was followed by a Welcome Address by Adrian Pratt, Director, American Center, Kolkata who welcomed the participants and speakers. 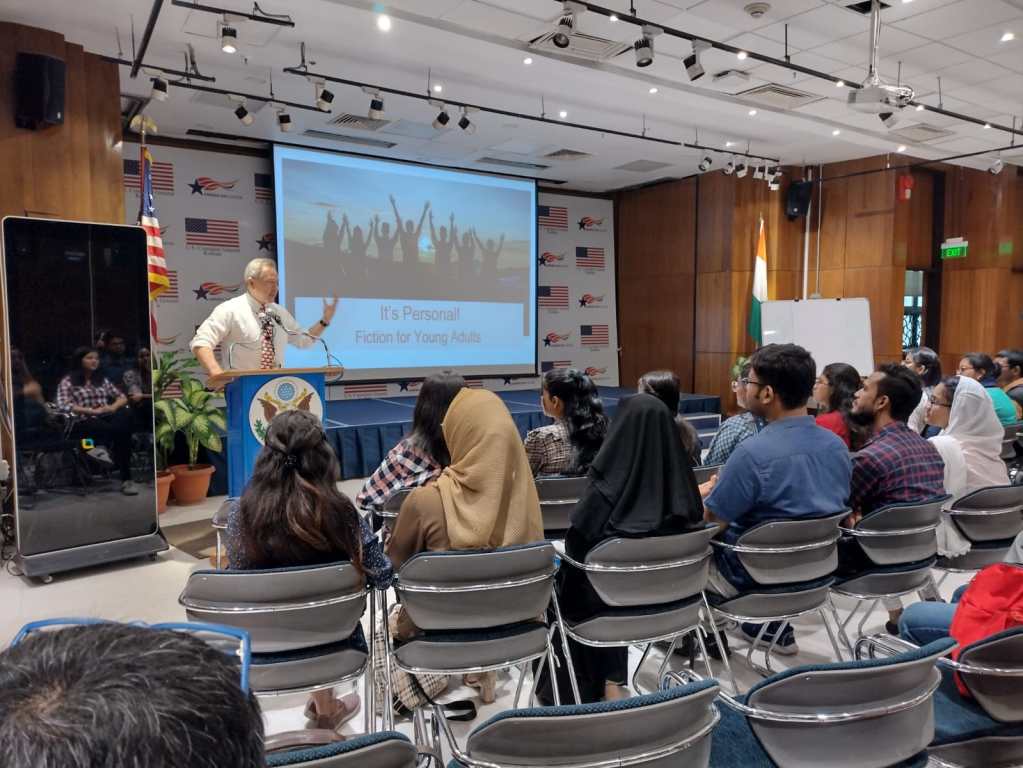 Thereafter, Dr. Chanda introduced ACLiSA and the pre-recorded segment with Dr. Sayantani DasGupta, which can be viewed below or on our YouTube channel.

Due to timezone conflicts, Dr. DasGupta recorded her session a few days before the main event with Ritwika Roy, from ACLiSA (who spent a good 3 minutes fangirling before she was capable of coherent conversation). DasGupta, whose family was deeply involved in India’s Freedom Struggle and the Bhasha Andolan in Bangladesh, draws from these histories in her middle-grade fantasy series The Kingdom Beyond, which includes the Kiranmala books trilogy, the Fire Queen duology, and the upcoming Secrets of the Sky trilogy. Apart from these, she also champions immigrant youth in her Jane Austen inspired YA – Debating Darcy (2021) & the upcoming Rosewood. She spoke about writing anti-colonial fantasy fiction, inspired by stories from her family, of discovering herself through her characters, representing immigrant joy as a Bengali-American through her works, and gave writing pointers to the participants. The conversation ended with a short reading from Force of Fire (2021).

Following a short tea break, Ritwika Roy introduced Payal Dhar who began the in-person portion of the workshop. Dhar, a journalist and YA novelist of books Slightly Burnt (2014), It Has No Name (2021), and the recently published Sands of Time (2022), divided the workshop into 2 parts. In the first part, they discussed the concepts of idea, and plot with the participants, giving them short writing prompts to write stories with, as exercise. In the post-lunch session, they delved deeper into the act of writing through further prompts about premise, characterisation, and perspective. In between these, they fielded questions about writing in general and their own writing from the group. Together, Dhar and the participants, who were hanging on her every word, created wild and fantastic stories – some dark, some hilarious, some outright outlandish.

At the end of Dhar’s sessions, there was a short presentation from the US-India Educational Foundation on higher education opportunities in the US. Dr. Sarkar took over then to give the Vote of Thanks, after which the Dhar and the organisers were presented with tokens of appreciation from American Center. The day wrapped up with a photoshoot – some directed, some impromptu, and a lot of laughter and food for thought.

For us at ACLiSA, naturally we fangirled over one of our favourite authors, and in equal measure, felt gladdened by the interest and enthusiasm in YA fiction that the participants had. We hope we can continue organising such events in future.