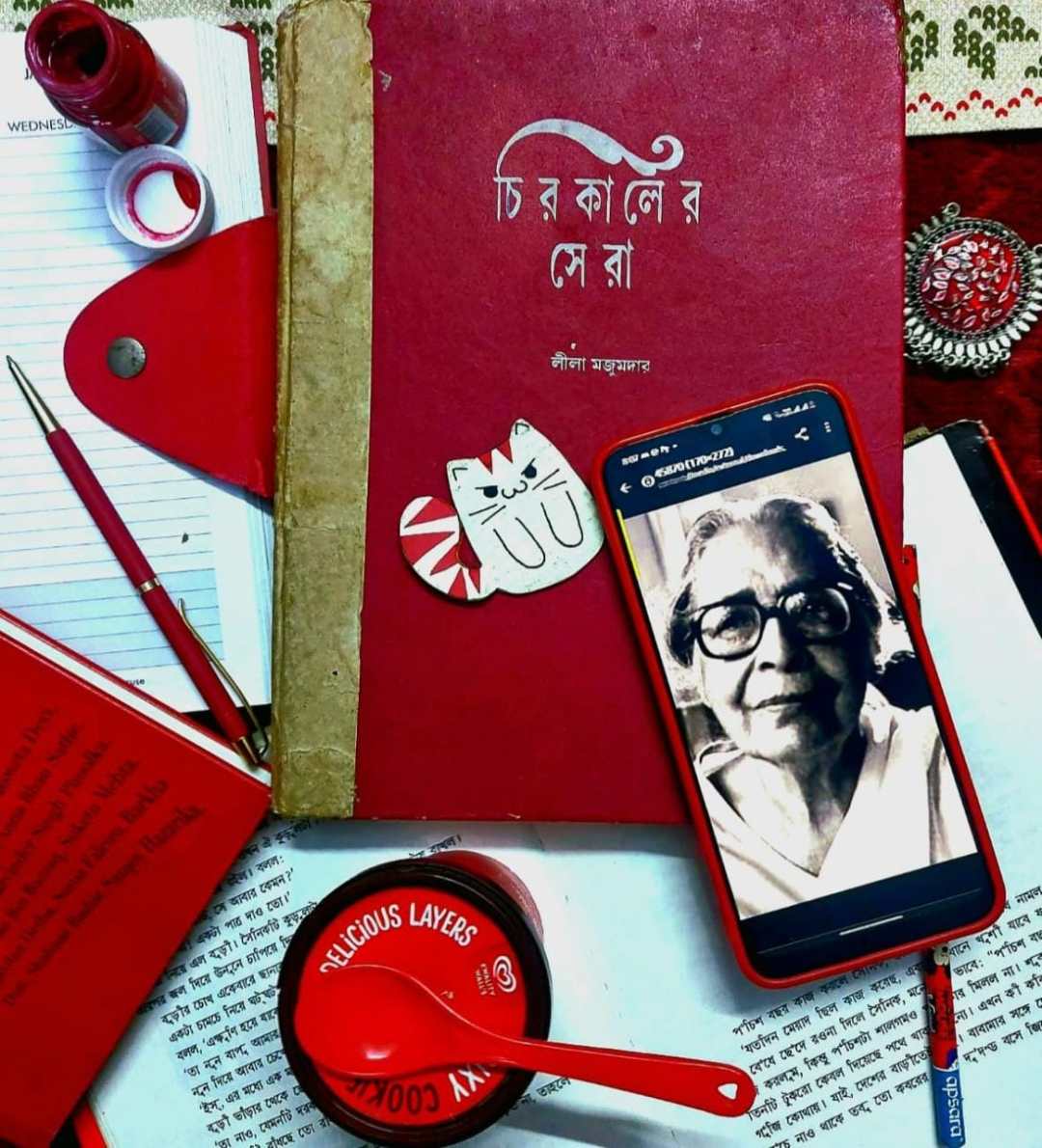 A Fangirl’s Experience in Translation

In this piece, Kajori Patra writes about translating Leela Majumdar’s Holde Pakhir Palok as an amateur translator and reflects on how closely entwined Majumdar’s works are with her own sense of identity.

Trans: “At the hypnotic fragrance of kerosene

The most ferocious beasts become dim,

Bottoms up! Drink in cans of tin,

Translating Leela Majumdar was an odd, multidimensional and extremely personal experience for me. It seems almost that the twelve year old me could have translated it better than the present me, with my burden of language and complexity of vocabulary obligations. One of the most thrilling aspects of my childhood birthdays was the possibility of receiving books (now there’s no more apprehension, with the advent of online shopping platforms), and I got introduced to Leela Majumdar suddenly and abruptly, which, I believe, is the best way to be introduced to her, when you’re least expecting it, on my twelfth birthday. And thus began what would be my long, comforting relationship with Rumu, Jhogru and Bogie. Leela Majumdar has this ability to make you a secret accomplice of her characters, and she led me on to the marvelous adventure with Rumu, Bogie and Jhogru before I could hardly understand the depth of the attachment that I was forming with her works. Working on her stories is, actually, a homecoming. The Holde Pakhir Palok begins with an absence, a state of displacement, thus effectively beginning two simultaneous processes. It states the gap in the fabric of real time and incidents, which, as we proceed, is filled with alternate narratives of magic and dreams; while at the same time, it places me (or any former child-reader) in this situation of distance from ‘home’, the fantastical childhood when my heart was, like Oliver Jeffer’s child protagonist, out of the glass bottle of adult realities and faithful subscription to ‘real’ experiences2. The book has two worlds, the ‘real’ world which Rumu, Bogie and Jhogru inhabit, where things written in books make sense – where distance is measurable by the intensity of the leg cramps that follows after walking it or time is linear and can only go forward and nowhere else – and the ‘other’ world, which Jhogru calls the ‘Dumka in my mind’. He refuses to visit his homeland, the real Dumka, lest the Dumka where it is possible to climb a mountain where trees also climbed along with you, where tigers could transform into humans and humans into mermaids, vanished with his crossing over the threshold of the fantastic and the death of his child self. I, as a reader, was equally afraid to revisit the book that was a childhood Bible; for, I too was afraid, just like Jhogru, of losing the privilege of experiencing reality without the constraints of adulthood, as Jhogru had done while growing up in the tiny mountainous village. But unlike Jhogru, my Dumka was secure within the pages of a book, it remained the way I had left it years ago when I had moved out to forge a way for myself, and it therefore becomes a responsibility for me to lure some Rumus and Bogies to Dumka too.

The novella opens with, “Bhulo still hasn’t returned”3, almost anticipating every adult reader, who, once they have been away from the book too long, might perhaps find it too late to come back home. It expresses a concern for all the lost travellers who leave the security of fantasy and magic, in the search of the ‘real’. It was in the absence that I found myself, tiptoeing back, like Bhulo, with my “ears drooped down, tail between legs, darting sneaky glances sideways, like a thief”4. I was afraid of disrupting my childhood kingdom of riverbeds and pakshirajs, mermaids and anthropomorphic tigers; I was afraid that I would discover that I was just a silly, lonely child who had imaginary friends. But Rumu and Bogie and Jhogru fought their best, they will fight their best for anyone who gives them a chance, for Rumu will go to the extent of hiding huge spiders within her frocks to bring them for Jhogru to perform the rituals of the niduli mantra, the mantra of change, of transformation. To what, you’d ask. I think, to a believer. The niduli is a ritual that reverts back, it transforms lost souls back to their original selves. The entire book, so to say, is a transformation process for any reader who has lost connection to their fantastic self, for anyone who is willing to establish a lifelong association with the grey area between reality and fiction.

The niduli mantra transforms people overnight as they sleep. It is surprising how spaces, absences and gaps are thickly populated by events and incidents in Majumdar’s novel, where all the fantastic magical stuff happens in an unseen land far away. The supernatural transformation happens when Rumu and Bogie are asleep, Bhulo’s encounter with the golden bird happens beyond the book’s scope. Majumdar’s gaps are not silent, in fact, they are pivotal to her stories as being the only sites of action that her non-gaps later substantiate upon.

The greatest asset of Leela Majumdar’s stories is her language. Her language can contain the ease of a child’s vocabulary and the complexities of an academic’s apprehensions. It is the language that had made me suffer as the translator and enjoy as the reader. Majumdar slips multiple casual references of popular folklore characters, which becomes, of course, a translator’s nightmare. But what is important in texts like this is the value of the feelings, the sentiments and the magic inherent to the plot more than the linguistic structure or cultural references. Thus, mayur-meye becomes the peacock-girl, kharish becomes cobra and holde pakhi, the golden bird. The title, ‘Holde Pakhir Palok’, literally translates into ‘Feather of the Yellow Bird’, but I have translated it as ‘The Golden Feather’. The Bengali terms focus more on the feather, but its literal English translation would have drawn the focus more to the bird. Personally, it is the feathery aspect of the novella that is most appealing. Like a feather, it has a whispery quality, almost surreal, not quite belonging to either the realm of tangible reality or imaginary fiction. The bird in question is certainly an important character, but not so much as to determine the nature of the novel. And, although ‘holde’ is literally ‘yellow’, I have chosen to use ‘golden’, because the novel refers to its bright, shining quality. These birds are not any species of documented Indian birds, but perhaps the kind that can only be found in the Dumka of fantasy; the Dumka of reality does not record any such bird which has ‘no legs’ and ‘crimson ruby-like eyes’ and ‘no voice’. Like a dream, they only flutter, never settle down, dragging anyone who has ever touched them all around the world, never letting them settle down too. Perhaps, we call them dreamers. The golden bird reminds me of the shining quality of fantasy, the un-‘real’ but undeniable lustre of it. Translating Majumdar’s language is a difficult task (or perhaps it so for me, an amateur translator), because of the ontological quality of the essence of the Bengali middleclass ‘bhadralok’ in it, the slightly funny colloquial language which reads like an extended joke. It was difficult initially, but the pace of Leela Majumdar is infectious and delicious, it catches up with one easily. I can only hope to have retained the savoury quality of her work.

Why did I choose to translate it?

With so many resilient and informed and appropriate children’s literature already available for South Asian children, why do we need to translate kidlit from a time when skopos of children’s literature, expressions and expectations, age and consent were terribly blurred? For, I find Leela Majumdar a very self-consciously post-modernist writer – someone who is aware of her responsibilities as a children’s author, someone who chooses to practice a lifelong commitment to what was (is?) considered as ‘lesser literature’, in spite of being a professor who taught ‘mainstream’ literature in many renowned colleges. Holde Pakhir Palok is essentially a post-modernist novella. It problematises the dialectic between reason/ wisdom and imagination/fantasy. Jhogru is at the centre of this dialectic, by being the source of the stories. On the two sides are Bogie and Rumu. The novel uses Bogie as the more ‘rational’ and ‘educated’ character who refers to his books and denies anything that he hasn’t read about. Bogie becomes the archetype of the textual form of education, which excludes oral/storytelling culture and focuses on texts existing in ‘real’ time and space. Rumu, however, is not sceptical, she chooses to keep an open mind and generally believes in the stories. She harbours no educational referential framework to judge the truth of these stories against. Apart from reason versus imagination, a split in the form of education, traced through Bogie’s religious adherence to books versus the alternate motif of Jhogru’s oral tales that have deep philosophical impacts, is frequently referred to by Jhogru who dismisses the books as being inadequate. Majumdar seems to be on Jhogru’s side in this; in the end, like all of Majumdar’s best novels, the readers are left questioning the true nature of truth. The nature of facts, fiction and fantasy are all left in a gigantic intertangled mesh.

Holde Pakhir Palok has, among other things, a distinct metafictional quality. It is a story about storytelling, very aware that it describes what it actively engages in. Often, Jhogru asks, “Do your books talk about this?”5, and then launches a story about Dumka. The fact however remains that Majumdar’s book does talk about it, and therefore, in the self-asserted act of claiming that all that is written in books are definitely true (Jhogru argues that fairies must be real as Granny had read them a story from a book of fairy tales; Bogie declares that the earth is three-fourth water because books told him so), the novella finally gives Jhogru’s stories the status of truth. It becomes the age-old tale of the chicken or the egg, and the oral tales are written down in an actual text. The novella looks at storytelling within the framework of the story itself. Jhogru is the narrator, creator and collector of the many tales that are told throughout the story. The tales mark the journey of the children, especially Bogie, from the fixture towards reason to at least the ability to question reason.

It is universally acknowledged that every translation carries the personal politics of the translator – mine has been the thrill of reading this story for the first time as a teenager. No one can imagine the kind of heartbreak I had when, a few years after reading the book, I had learnt that Dumka was, in fact, a very real place.

Kajori Patra has recently completed her M.A. degree in English from Jadavpur University. She likes to read Bangla KidLit and is often accused of being ‘childish’ in her choice of literature. She also has an academia account to fool KidLit scholars into taking her seriously: (2) Kajori Patra | Jadavpur University – Academia.edu. Hopefully, the government(?) will fund her odd obsession with Bangla KidLit someday. She can be found at @bookisque on Instagram and @not_cleopatra on Twitter.

One thought on “A Fangirl’s Experience in Translation”